BBC Television Centre Up For Sale 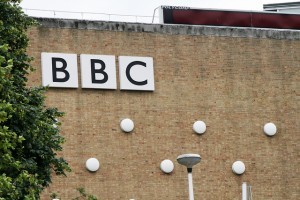 Well, it's been coming for a while. But the announcement that BBC Television Centre in White City is on the market is still something of a shock. The complex of buildings on Wood Lane has defined the area for 50 years. It will now be sold by the Beeb, who are looking for either a 'conventional sale or offers to redevelop the site as a joint venture'.

The historic studios were first used by the BBC in 1960. Series such as Fawlty Towers, Top of the Pops, Strictly Come Dancing and early Doctor Who were all filmed here. Much of the Corporation's news and sports coverage is recorded on-site. The Blue Peter Garden is out back. Many memories, happy and sad, have their roots in that building.

The 'electric donut' will be cleared by 2015, with many staff (and the Blue Peter garden) moving up to the BBC's Salford site or the refurbed Broadcasting House in central London. Much of the building, which was supposedly planned on the back of an envelope, is listed and likely to be retained in any future development.

The announcement has prompted an outpouring of grief on Twitter. Danny Baker, fresh from being given the all-clear after a recent battle with cancer, led the charge: "From the company that brought you Restoration – saving the nation's heritage. Soulless, soulless bastards."

The Guardian has a roundup of public reaction, including fond memories of the Broom Cupboard and even nostalgia for the Wood Lane address. You'll find plenty more wisecracks and reminiscences under #TVC.