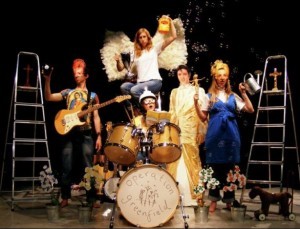 Little Bulb Theatre company: what a gem. Based in the South East, this team of highly talented young actors is made up of graduates from the University of Kent. Since their debut production, Crocosmia, in 2008, which won them several awards, including a Fringe First, they’ve been devising more works and touring nationally. This one, Operation Greenfield, opened at the Edinburgh Festival last year to a most enthusiastic reception from the press. And little wonder. Sweet and incredibly fun, director Alexander Scott’s production brings together heightened character acting and musical flair for a fresh, funny, uplifting evening – this is the kind of theatre that has you walking out with a grin on your face and a warm, fuzzy feeling somewhere in the vicinity of your solar plexus.

In a world of GCSEs, church groups and forest fruits squash, four teenagers in a fictional middle England town meet up after school to practise for the annual talent competition. With a variety of sounds – funk, folk, four-part harmonies in French – and a host of musical instruments, from accordion to xylophone, every one of which they excel at, this gifted bunch sing and play their way firmly into our hearts.

With a humorous, tongue-in-cheek, ‘bad acting’ style, the actors capture perfectly that self-conscious stage of adolescence with an endearing set of characters. Dominic Conway is the bossy, sulky, slightly effeminate Daniel, with Clare Beresford as his best friend and bandmate (‘bandmate’?), Molly. They’re soon joined by nervy, nasal maths geek, Alice (Shamira Turner), who brings along Violet, the new French girl (Eugenie Pastor). As these shy, earnest, gawky teens, mouths permanently agape and shoulders up to their ears, the actors shuffle awkwardly round the stage. And with an array of masks and props that reflect the gaiety and fun of the piece – confetti, blowing bubbles, Barbie and Ken dolls, a huge cardboard cut-out of Elvis – Scott creates a production that is as visually cheerful as it is musically.

Wonderfully ingenuous, this winsome story about friendship, growing up and the first stirrings of desire is a joy.