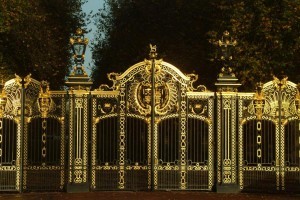 As a nation swooned over a Royal wedding costing an estimated £10 million+, it emerged that cleaners at Buckingham Palace earn only £6.45 an hour, well under the recommended London Living Wage of £7.85ph (shortly to rise to £8.30).

The London Living Wage aims to lift families out of working poverty and is supported by London Mayor Boris Johnson.

The day before the Royal wedding, the cleaners, supported by the PCS union, held a protest to highlight their pay and conditions outside Buckingham Palace, only to be swiftly moved on by police. The majority were expected to work the following day without receiving Bank Holiday pay.

Some might struggle to understand why the world's richest woman, who receives a massive £30 million from the Royal List (ie, us)  towards the running of her household, should not be able to stump up the measly £1.85 an hour required to bring her cleaners' pay up to the LLW. However, the Palace argues that the cleaners are in fact hired by subcontractors KGB, rather than the Royal estate, and that they themselves, according to a Palace spokesperson, are:

"currently in negotiations about paying the London living wage. We are in correspondence with KGB. As a publicly funded body, we are concerned that our staff have fair rates and proper working conditions.”

Such concern is commendable. However, in case you feel the issue is too important to be left to Palace discretion alone, and a nudge in the right direction might speed things along, you could do worse than sign the online petition here.

Buckingham Palace may be the most shocking example of paying cleaners and other low-paid workers poverty wages, but they are most certainly not the only ones. For more information about who actually pays the Living Wage in London, read this post.

The photo by freefoto.com is used under a Creative Commons licence.