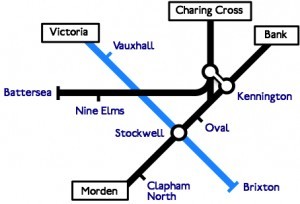 Those living in Battersea, Vauxhall and Kennington may find a leaflet in their letterboxes today that might be of more interest than the usual kebab and pizza promotions. TfL has mailed out 40,000 flyers giving information on the proposed Tube link to Battersea, and soliciting viewpoints from local residents.

The Northern Line extension would peel off at Kennington and serve the planned redevelopments of Battersea Power Station and Nine Elms, with new stations at both. Under current plans (which we know can be changed), the 3km spur would be privately financed, mostly from developer contributions. Securing the route is seen as crucial to the successful regeneration of the power station site, which has suffered more failed schemes than Wile E Coyote over the years.

The public consultation begins today with the leafleting campaign and a series of exhibitions where local residents can air their views: