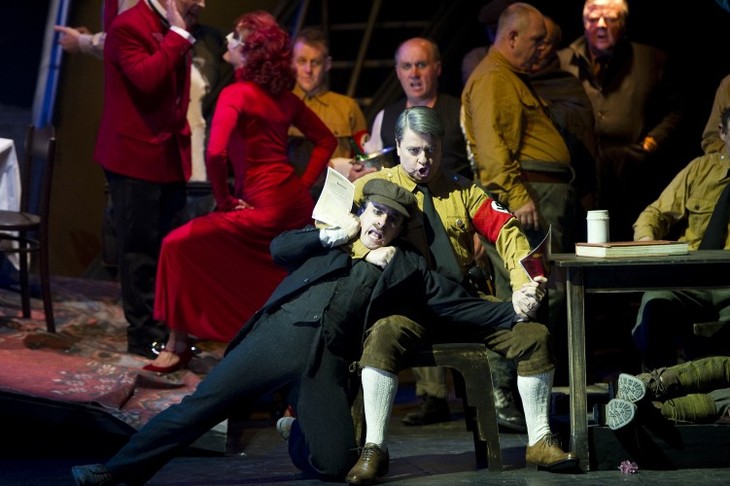 English National Opera has a history of inviting film directors to try their hand at opera. Not all have triumphed in their new genre, but Terry Gilliam’s The Damnation of Faust certainly proves that such an approach is worth sticking with.

In his staging of Hector Berlioz’s opera there is clearly some ‘Pythonesque’ humour, but it would be wrong to dismiss his dynamic visual approach as wacky and shallow. Across the evening there are German references to Caspar David Friedrich, Ernst Ludwig Kirchner, Egon Schiele, Max Beckmann, Max Ernst and the Bauhaus, as well as English nods to Edward Burra, Stanley Spencer, satirical cartoons and The Death of Chatterton.

Gilliam sets the Mephistophelean drama in Nazi Germany with allusions to the Olympics, Kristellnacht and the death camps. If the implication is that debauchery and sins of the flesh are only a hair’s breadth away from pure evil, in this context it seems a reasonable point to make. This is a deep production, and images of the pursuer of knowledge burning books before being ‘crucified’ upside down on a swastika certainly leave their mark.

Musically the evening is no less impressive. As Faust, Peter Hoare’s tenor voice is clean and pure while, as the object of his desire, Christine Rice combines lightness with resonance. Both visually and vocally Christopher Purves as Mephistopheles feels like the embodiment of an Otto Dix painting, while the chorus contribute some pleasing singing while demonstrating superb diction.

The one question mark is whether it works to marry such an offbeat staging with so pure an approach to the music, and Edward Gardner’s otherwise excellent conducting feels a little too straight for what is going on visually. Undoubtedly, however, this production is fun, clever and musically strong, and it should also be ideal for those seeking to try out opera for the first time.