March Against Privatisation Of NHS 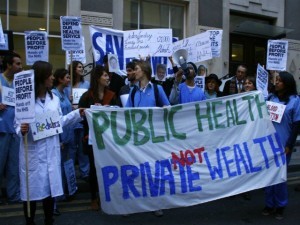 Over a thousand people marched through London yesterday to oppose proposed health reforms which, according to critics, will lead to the dismantling and privatisation of the NHS in all but name.

Health workers and supporters joined the 'Keep our NHS Public' demonstration from  University College Hospital on Euston Road to the Department of Health just off Whitehall. Medical students staged a 'die-in' outside Downing Street, and fake blood was thrown.

The focus of the protest is the Health and Social Care Bill being pushed through Parliament by Health Minister Andrew Lansley. In the face of public outcry, including from  GPs and the British Medical Association, the government has said it will conduct a 'listening exercise', but according to Professor Wendy Savage, co-chair of Keep Our NHS Public, the proposals:

"will turn the NHS into a commercial market. This unprecedented parliamentary pause is only a PR exercise. Health workers and the public know what the bill really means and resistance is growing. Does David Cameron really want this bill to be his 'poll tax'? He needs to listen to the people and withdraw this bill.'

A Department of Health spokesman said:

"Our plans to modernise the NHS will help put the professionals in the driving seat, cut out tiers of bureaucracy and reinvest resources into improving the quality of care for patients."

As they stand, the plans would allow private companies to decide what health services are to be provided and to whom - essentially, a universal service would be replaced with a market-driven one. Potential private investors are already licking their lips at the prospect of profits to be made, with one private equity spokesman gloating:

“The NHS will be shown no mercy and the best time to take advantage of this will be in the next couple of years.”

Thousands of jobs will be lost at London hospitals over the next four years, with 53,000 NHS jobs to be shed across the country.

The image is reproduced courtesy of www.workerspower.co.uk