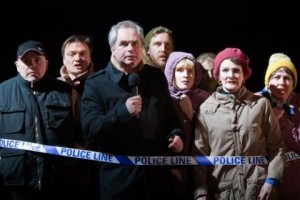 It’s been a while since we’ve witnessed a standing ovation, but Alecky Blythe and composer Adam Cork definitely deserved theirs.  In their remarkable new project at the Cottesloe, they tell the stories of the residents of London Road – where serial killer Steve Wright lived when he was arrested in 2006 and convicted for the murder of five prostitutes in the
Ipswich area.

Created from Blythe’s recorded interviews with the real-life residents of London Road around the time of the killings and after the subsequent arrests and trial – as well as with the sex workers that continued to work in the area – it’s a piece of documentary verbatim theatre that would be interesting enough in its own right, even were it not set to music.

But this isn’t musical theatre as you know it.  Rather than composing songs in the conventional way, Adam Cork has written a score around the natural speech rhythms, cadences and inflections of the voices in the original recordings.  Every single syllable, every ‘um’, every ‘er’, every stutter, hesitation and laugh, is retained and placed as a note on a stave, creating a kind of conversational speech-singing technique, enhanced by the backing of a six-piece band.

It’s an astounding piece of work; an inspired idea and, technically, incredibly tight.  It’s also – perhaps surprisingly, considering the subject matter – very, very funny.  A section where a frustrated news reporter keeps fluffing the broadcast because he ‘can’t use the word ‘semen’ before lunchtime’, being forced to euphemise with awkward phrases like ‘cellular material’, has the audience in stitches.

Director Rufus Norris has delivered a production that is as visually interesting as it is aurally impressive. It’s busy, energetic and quick-paced, the scenes running into one another without a moment’s pause, which makes the single moment of silence – a powerful, almost minute-long pause from the prostitutes – all the more thoughtful and moving.

The versatile company of 11 play over 60 characters, handling the challenging material with consummate skill and precision.  An astonishing achievement, this brilliant, very human play brings both Blythe’s signature verbatim technique and the concept of musical theatre to a whole new level.  Go and see this.  Just go.