Theatre Review: A Cavalier For Milady @ The Cock Tavern 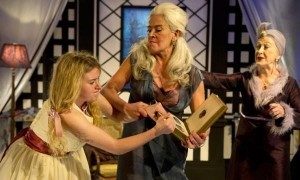 Following on from I Never Get Dressed Till After Dark On Sundays, this 60 minute one-act play is the second in a pair of previously unproduced works by Tennessee Williams, the rights to which have been granted the Cock Tavern Theatre in commemoration of the centenary of Williams’ birth.

Penned towards the end of Williams’ life, this portrait of madness and lust provides us with a harsh depiction of his own mother, and a more sympathetic one of his beloved sister, Rose, who, like Nijinsky, suffered from schizophrenia. It’s quite experimental and self-conscious in style.  At one point, Williams jokes with the audience on the subject of apparitions – suggesting that they are ‘maybe only possible on a stage, in a play written by a madman’; a nod towards Williams’ fears of falling prey to the mental illness that plagued his sister.

There are some tender moments in director Gene David Kirk’s production and it all gets a bit nasty towards the end, but it’s not enough to make up for the essential lack of drama and the fact that Nance is such a difficult part to pull off.  Caitlin Thorburn embraces Williams’ creation of a woman ‘prisoner of child’s clothes’, desperate for sexual fulfilment, alternating between gazing in rapt adoration at her apparition of Nijinsky (Sam Marks) and making hungry dives towards his crotch.  But it’s just a little too hard to make the character appear credible, and her desperation doesn’t quite sit deeply enough.  There’s some comedy from Gillian Hanna as Nance’s intolerant Irish babysitter, and Janet Prince and Lucinda Curtis are suitably wanton and self-absorbed as Nance’s crude mother and her similarly spoilt and shameless friend but, despite the actors’ best efforts, the characters aren’t really given the opportunity to be anything more than one-dimensional.