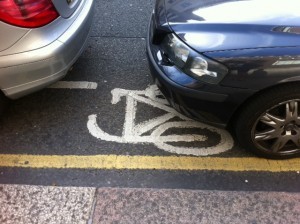 The founder of the Cycling Embassy of Great Britain, Jim Davis, spoke last night at the second Streettalk, a new series of ‘drink-tanks’ created by a group of people who ‘keep and eye on transport and the built environment’.

A friendly (if slightly sweaty) crowd gathered at the Yorkshire Grey on Theobolds Road to hear Jim explain his vision behind the Cycling Embassy, "I want what they’re having – how the rest of the world is achieving a real cycling revolution."

Jim took us through some of the British issues, complete with rogues gallery of offending and offensive cycling infrastructure (more of those here for fans), before showing off some upsettingly harmonious images of what has been achieved in Denmark and Holland. We learned some interesting bits - most interesting was the fact that Holland and Denmark had exactly the same issues as Britain in the 1970s as road building took over public space, with a dramatic rise in pedestrian and cycling deaths as the result. It was this death-toll of children on the streets that prompted the incredibly successful movements in both countries to reclaim their streets. While the Danes and Dutch took back their streets, it seems we took our kids inside and bought a bigger car.

Question and answer time revealed some more interesting titbits, such as the history of the cycle lane on Tavistock place, a Camden Cycling Campaign project that was intended to link all the northern railway terminals, but was cut short by Westminster and Islington’s lack of interest, and scaled back by a furious Taxi lobby.

Streettalks are the sort of brilliant pub based politically aware education events that London does so well. If you’re like-minded you can find out more on Movement for Livable London, and do come along to their next event on 4 May, with Dr Harry Rutter, Director of the National Obesity Observatory.