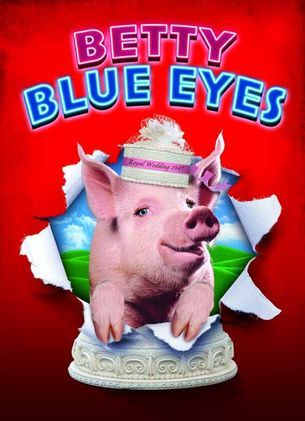 Cameron Mackintosh's new musical about an illegally reared pig, Bettty Blue Eyes opened last night, giving London's theatre critics lots to get their teeth into. Puns abound in this morning's write-ups (both the Guardian's Michael Billington and Charles Spencer of the Telegraph fall for a clichéd line about "bringing home the bacon").

Having seen Betty Blue Eyes, based on Alan Bennett's 1984 film A Private Function, this Londonista has to admit to finding the overall production decidedly mixed.

And despite the response from the official critics being overwhelmingly positive, we're pleased to report that theatre bloggers (the people who *really* know their stuff!) had some similar reservations.

"It’s fine. It’s not awful. It’s not brilliant. It’s perfectly nice," starts Perfect at somusicaltheatre.com. The most damning comes from the West End Whingers: "We didn’t warm to the songs. We didn’t even warm to the pig." They accuse Betty Blue Eyes of travelling "the Sondheim route; actors who can (kinda) sing, rather than singers who can act."

The Whingers do praise Adrian Scarborough, "gamely looking not just like 'Allo 'Allo!'s Herr Flick, but also slightly out of his comfort zone. Let’s hear it for chutzpah." Ian Foster (oughttobeclowns.blogspot.com) was unsure: "Adrian Scarborough’s Meat Inspector Wormwood is a curious character... uncertainly pitched between pantomime villain and fetishist." We couldn't agree more; despite loving this actor, surely his out-of-place surrealist song Painting by Heart is ripe for some trimming?

Happily, the bloggers were in agreement about the lead actors. Glen (of Glen's Theatre Blog) says "Central to the piece are two strong performances from Sarah Lancashire and Reece Shearsmith as Joyce and Gilbert. Lancashire seems a natural stage musical leading lady, totally commanding the stage. Her rendition of Nobody, a fantasy sequence transforming the housewife into glittering star is perhaps the highlight of the evening." Soliloquy at soliloqu.wordpress.com echoes Glen's praise, saying Lancashire has "a stunning voice, great stage presence and fantastic comic timing." 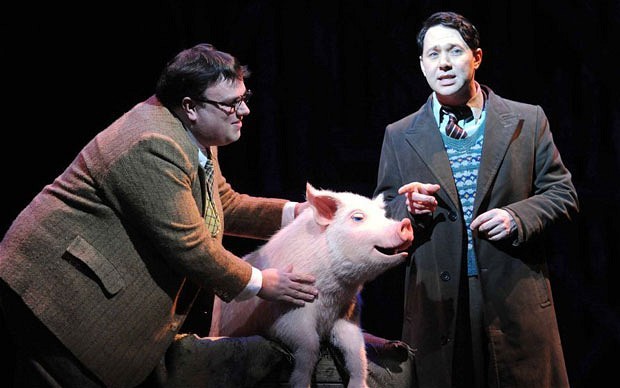 But what about the real star of the show? That mechanical pig certainly divides opinion. Forster found it "a bit freaky with its constant head movements... I couldn’t watch it for too long", while the Whingers found the "head-rolling, eyelash-fluttering and dolphin-friendly mouth opening and shutting... not so much charming as distracting. "  But for Soliloquy, Betty is "very cute! She is on for several scenes and you can’t help but look at her... very realistic and truly adorable."

Highlights for this londonista included the fantastic choral skills ensemble, some brilliantly bonkers songwriting by Stiles and Drew (one about chiropody, another about a bad smell – seriously), and slick choreography by Stephen Mear. But we can't help feeling slightly confused by a comedy with so few laughs and such varied energy levels.

Betty Blue Eyes continues at the Novello Theatre until October. Visit www.bettyblueeyesthemusical.com for more information. Or head to www.stilesanddrewe.biz/listen_to_the_music to sample some of those nutty songs.