London Stand Up And Sketch Comedy: 1-7 May 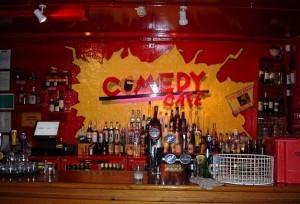 Our choice of where to find funny this week.

Sunday: It's the final day of the Camden Comedy Crawl - performers include Robin Ince, Dan Antopolski, Isy Suttie, Henning Wehn, Sean Hughes, Adrian Poynton and Laura Solon, but we don't know who's on which day. You pays your £22.60 (or £38.80 if you want to make a weekend of it) and you takes your chances. Everything kicks off at 7pm.

Monday: Celebrate there being no school / work in slightly perverse fashion with After School Club at the Camden Head. Chris Coltrane introduces Thom Tuck, Bec Hill, Tom Craine and Tom Parry from Pappy's. Doors open 8pm, tickets a fiver and there'll be CAKE.

Tuesday: Mark Thomas tells all about his experiences of walking the length of Israeli separation barrier, at Kilburn's Tricycle Theatre, for the next month. 7.45pm / 4.30pm matinee, £15 Sun-Thu / £18 Fri-Sat.

Wednesday: Adam Riches starts a run at Leicester Square Theatre, mixing up his sell-out Edinburgh shows from the last three years. That's a lot of stuff to pack in, so expect proper quality. Various times until 15th May, £12 / £10.

Thursday: We love Andrew O'Neill. But we're just suckers for any metalhead vegan tranvestite who crosses our path. Catch the only UK performances of his show Out of Step at the Soho Theatre from today (9.45pm, £13 / £11).

Saturday: Set the PVR for Stewart Lee's new series of Comedy Vehicle (seriously, BBC2, we're overjoyed at the recommission, but why 11.20pm?) to get in the mood for the man himself at the Union Chapel. Alex Horne, Nina Conti, Elis James and Phil Nichol complete the bill. Doors 7pm, tickets £16 + booking fee.

Inside Shoreditch's Comedy Cafe, by Johnnie Scarlett from the Londonist Flickr pool