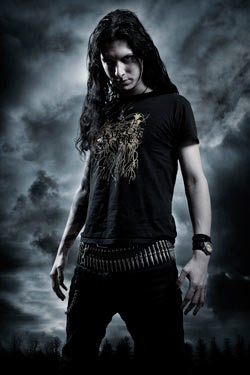 Andrew O'Neill is a lot of things, as he cheerfully tells us during his 45-minute whirlwind show - a scrawny metalhead, a vegan anarchist transvestite, a rubbish fighter, a former jockey - but, above all these, he is underprepared.

This doesn't negate the quality of the show but if you're not expecting a preview, it does affect the rhythm. O'Neill's schtick is a hot-pot of jump-out-and-scare-yous, childhood nostalgia, bus-fight anecdotes, traditional gags and vented-bile pseudo-ranting - it's just, it's all punctuated with some eye-rolling, mid set evaluation, crib-note checking and a lot of umm-ing and ah-ing.What he currently lacks in coherence, pace and polish is more than made up for with audience interaction. Despite his proclamation at the head of the show, "I'm a misanthrope... which means I hate about 7 or 8 out of ten people" he is genial and comfortable in front of a threadbare audience (made up of, clearly, the other two out of the ten plus a couple more), always flirting with but never quite dying on his arse. A livewire, he throws questions out like bullets into the audience, "if you could be bitten by a radioactive anything, what would it be?" and is at his best deciding what is 'goth' and what is 'metal' from whatever the audience threw at him (for reference: he is metal, and the two are completely different). "Chips? Chips are METAL!" he tells us, like some spooky Professor; "Chips with salad - goth."The Occult Comedian act needs a little more night-before-an-exam style emergency revision before it goes to Edinburgh next week, but is well worth catching in less Scottish surroundings tonight.By Joel GolbyAndrew O'Neill is on at the Camden Head tonight, 7.15pm. All tickets at The Camden Fringe are £7.50. Find out what else is on at www.camdenfringe.org.