An ancient graveyard has been uncovered at a Crossrail site close to Liverpool Street station. The remains are thought to belong to inmates of St Bethlehem Hospital, more commonly known as 'Bedlam'.

The hospital stood at this site between 1247 and 1815, when it decamped to the building that is now the Imperial War Museum. During those long centuries, the hospital housed thousands of patients with mental health issues (or lunatics, to use the historic and more direct parlance). The dig at Liverpool Street is now bringing those unfortunates to light for the first time in hundreds of years.

The John Rocque map of 1746 shows the scale of the graveyard, which lies partly under the station and partly under Liverpool Street: 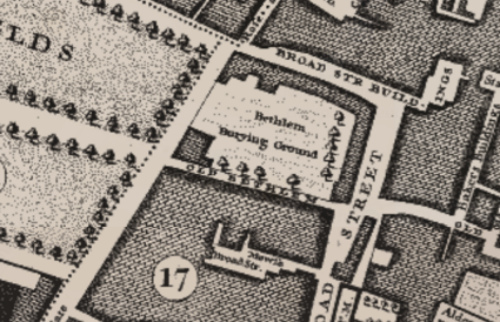 The bodies will be removed for study. Some will be retained by the Museum of London while others will be re-interred, presumably at the City Of London Cemetery.

Although the Crossrail digs will cause many inconveniences for years to come, this find highlights one of the plus points. The deep excavations at numerous central London locations are sure to be a boon for archaeologists and those interested in the history of London.