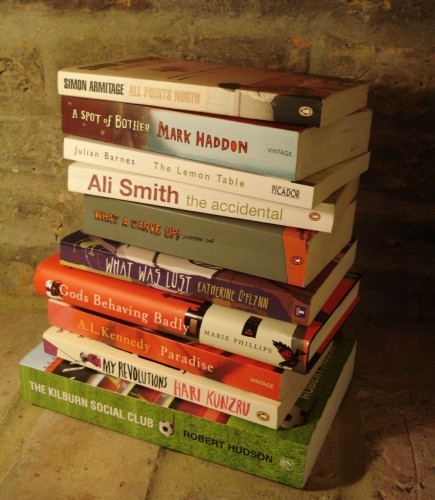 The Quiet Volume for the London Word Festival continues at Bishopsgate Library until Friday (various times, £12 for two people).

If you're wondering why the hell there are so many Russians in town, it's because The London Book Fair has a Russian flavour this year. Lev Danilkin, Francis Spufford and Orlando Figes explore that 1950s/60s Soviet Dream at the Southbank Centre (7.45pm, £10). Over at Foyles, Grigory Chkhartishvili - aka Boris Akunin - talks detective fiction (6.30pm, free).

Ambit is back at the Betsey Trotwood with a new issue and Kate Potts, Nick Parker and Nick Sweeney for company (7pm, free).

Thursday: More Russians! Catch the shape of the country's literary future in Igor Savelyev, Lev Oborin, Alisa Ganieva and Anna Starobinets at the Southbank Centre (7.45pm, £10); Henry Porter, Christopher Andrew, Sergei Kostin and, if you missed him yesterday at Foyles, Boris Akunin discuss spies at the Courtauld Institute (7pm, £12 / £10); Sergei Lukyanenko and Dmitry Glukhovsky gaze into the future of Russian SF at Foyles (6.30pm free); Pavel Kostin and Andrei Kuzechkin talk about their new books at the Free Word Centre (6.30pm, £6 / £3); and Slam! poet Andrey Rodionov is at the Poetry Cafe (6.30pm, free).

The Highgate Poets read from their new collection at the Big Green Bookshop from 7pm.

Friday: At the time of writing there are still tickets available for the Josephine Hart Poetry Hour at the National Theatre (6pm, £3.50 / £2.50), tying in with Frankenstein and going all Romantic on us. Don't expect Benedict Cumberbatch or Jonny Lee Miller - they're performing an hour later and probably have better things to do - but Dan Stevens, Damian Lewis and Harriet Walter are on hand to read. Can't say fairer.

The first Rowan Arts Poetry Slam! arrives at the Floirin pub on Holloway Road. First 12 poets at the door get a chance to compete (8pm, £3 / £2 performers).

Niki Orfanou is back at the Poetry Cafe telling more stories, this time about the Enigma of Emilie (7.30pm, £5).

Sunday: Head to Hackney's Pembury Tavern from 3pm for a free Scrabble tournament, courtesy of the London Word Festival.

Private View from the London Word Festival is an evening of performance inspired by striptease (8pm, £8.50 / £10.50).

There's a series of poetry workshops at the Coin Street neighbourhood centre for you to unleash your inner meter (11am-2pm, free).