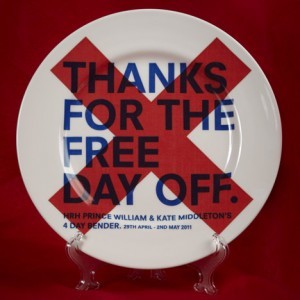 Staying in London for the extra long bank holiday weekend? There's a Royal Wedding party to suit any mood except indifference.

Get ready for the big weekend with A Right Royal Rave courtesy of Pump Up The Volume at XOYO, Cowper St EC2. This stag and hen style do bursts with 90s hip hop, house and pop fit for kings and commoners. 10.30pm-4am, tickets £8, £12 on the door.

The Leonard Street Royal Wedding Street Party kicks off at 10am on Leonard Street, Shoreditch EC2A. The wedding will be beamed to a big screen and other entertainment will be provided by the Book Club, The Griffin and Pure Evil Gallery. A vintage fair will be laid on by Judy’s Affordable Vintage Fair and Rag&Bow – The Roaming Vintage Store. Expect live music, food and booze and party games plus the reception rolls on into the night with a party at the Book Club from 6pm. And it's all free to attend. RSVP on Facebook.

There are royal zombie celebrations in Soho Square from 10am, led by Queer Resistance.

Lords Cricket Ground in St Johns Wood is throwing a street-style party in its grounds. The home of cricket screens the wedding in Harris Gardens whilst Middlesex play Surrey on the pitch. Entry tickets for the day are just £15 for adults, £7.50 for over 65s and kids are free.

Butterfly Social throw a street party based around the Lamb in Leadenhall Market. Starting at 10.30am, watch the wedding, have lunch, play games, get the giggles and bop to a cheesy disco. Tickets £12/15.

The Jam Tree in Chelsea will be open from 10am with jugs of Pimms, a royal barbecue, a sunny back garden to chill out in and general merriment to the small hours.

The Water Poet pub on Folgate Street, Spitalfields hosts a whole day of revelry and a commemoration knees up from 11am. It's all Londony retro, picking the best bits from 1700-1900 with a Music Hall sing along, accordion chanteuse, screenings by The East End Film Festival, Jack the Clipper's Barbers in the cellar, Sipsmith Gin Palace, Pearly King & Queen of Bow Bells plus Fuller's cask ales, Truman's limited edition bottles and a rather magnificent horse and dray. Free entry.

Upstairs at the Ritzy, Brixton is open from 11am screening the wedding and throwing a 'Right Royal Raucous Royal Wedding' party with Pimms, bunting and music hall maestros, the Dead Victorians. Free entry all day.

Five Nicolson's pubs along the Thames - The Mudlark, The Old Thameside, The Blackfriar, The Horniman at Hays and the Doggett’s Coat & Badge - will be showing the Royal Wedding on their widescreen tellies and celebrating with barbecues and street entertainment. You can try their specially commissioned Royal IPA while you're there.

Republic's Not The Royal Wedding Party takes place in Red Lion Square, Holborn from 11.30am. It's a street party "celebrating democracy and people-power rather than inherited privilege" so don't expect to watch the balcony kiss at this event.

Royal Wedding Bash unleashes a day and night time party to celebrate with Wills n Kate. Between 10am-3pm watch the wedding live with a glass of champagne and sit down to a mega cream tea afters with a dash of live comedy. The Royal Wedding Evening Ball is from 7-11.30pm with live (rock) music. They both take place at Porchester Hall, W2. Tickets are discounted at present (can't shift 'em?) day time: £75 / evening: £30 and offers for groups.

Drink, Shop, Do urges you to put on a posh frock and watch the wedding on their big screen whilst taking a Royal Afternoon Tea (strawbs and champagne) at 9 Caledonian Road, London, N1 9DX. Book your place and scrub up nice.

The Waterloo Bar and Grill opposite Waterloo Station tell us it is showing the wedding on the telly in the front bar and Chef is rustling up a special tea.

The Bavarian Beerhouse celebrates the wedding at both Old Street and Tower Hill with Willenkate lookalike contests and Bavarian wedding cake. Open from 8pm-midnight, admission free.

It's Royalty v Anarchy at Throne Out, Proud Camden from 7.30pm. Tales of the Unexpected bring fire breathers, aerialists and all sorts of dark embellishments to the Horse Hospital, with live music and carousing till 4am. Tickets just £3.50 + bkg free in advance.

Meanwhile, at Proud Cabaret at 1 Mark Lane EC3 there's a celebration of Love and Lust with satire of everything British, royal role reversals and a "patriotic striptease". Supper club dinner £54. Show only £11. 7.30pm-1.30am.

The Alternative Royal Wedding Reception takes place at the upside down cow on the Southbank AKA E4 Udderbelly at 7.45pm. Guests will be entertained over 2 hours by comedy and cabaret and those in full on wedding finery get discounted drinks. Tickets £19.50.

Fuck the Royal Wedding at Buffalo Bar, Highbury and Islington from 8.30pm. A decidedly 'anti' party, it even has a band called Fuck off Piss off playing with support from the socialist R&B of Three Faction. Tickets £5 adv, £6 on the door.

The Royal White Wedding is for those who wish it was them in the big frock and those who just love a wedding reception. Dress as "Henry VIII's brides, Princess of Whales, Duchess of Pork... Prince Consorts... walking cakes" basically full on wedding clobber for a right royal piss up. At 229 The Venue, Great Portland Street from 9.30pm-3am. Tickets £8 advance, £10 on the door.

The William IV pub - as visited on our Royal Wedding pub crawl - is holding a day late street party on the pavement surround its premises. £10 entry includes a glass of wine and a burger plus knees up entertainment between midday and 7pm.

Club de Fromage have a Right Royal Knees Up 80s special at the Islington Academy from 10.30pm. "Party like its 1981 at the wedding of Charles and Di. Make sure you get togged up in your 80s wedding best as we’ll be crowning the King and Queen of Fromage." Tickets £6.50.

What have we missed? Tell us in the comments.