Where To Eat Pancakes Tomorrow 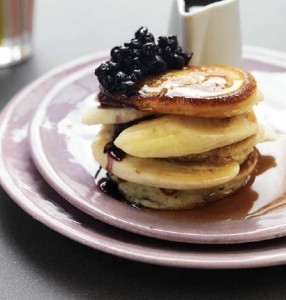 Whether or not you choose to give anything up for lent, it would be wrong to let tomorrow pass without indulging in a pancake or three.

With London’s dining venues clamouring in a bid to offer the best batter and the tastiest toppings, there’s certainly no shortage of options.

Argentine ice-cream parlour Freggo on Swallow Street takes the generosity award, with free pancakes for everyone who buys a coffee between 9am and 6pm tomorrow. Not a bad deal, though the tossers amongst you might be more interested in beating Also Zilli’s world record of 117 flips in a minute. Just pop into Zilli Fish on Brewer Street any time from 8am to give it a go.

Elsewhere, chocolatier William Curley joins in the festivities, working his magic on the likes of caramelised banana and chocolate sauce pancakes (£7.50) from his Ebury Street shop in Belgravia. And if even this level of sugar-clad indulgence feels a little tame, then you can always take Giraffe up on its Pimp Your Pancake offer and go for a super-size Shrove Tuesday. From £5.95, you can choose toppings ranging from Crunchie bars to Baileys sauce and order as large a pancake pile as you like at any Giraffe restaurant.

For the more savoury minded, The Water Poet in Spitalfields has created a dedicated pancake menu, with intriguing filling combinations available from midday, including sprouting broccoli, walnut and stilton as well as sweet sensations such as a Black Forest pancake with Meantime Chocolate Porter, cherry compote, ice cream and chocolate sauce (both £7.95).

Alternatively, those in Soho may wish to head down to The Gay Hussar. Renowned for its history of political plotting and caricatures of politicians, the timeless hideaway can boast being the first Hungarian restaurant in London and majors in palacsinta — traditional Hungarian pancakes, which are available across starters, mains and desserts to allow for a complete pancake blow-out.

The Botanist on Sloane Square will also be getting in on the action, with pastry chef Boyne Kleyhnans devising some particularly refined crepes to eat either on their own or as part of the restaurant’s acclaimed afternoon tea. And there’ll be luxurious fillings of lobster and the like at Hix Selfridges; breakfast pancakes at Morton’s on Berkley Square; Scotch pancakes with maple syrup, clotted cream and strawberries at The Garrison on Bermondsey Street; and American-style pancakes and cocktails available all day at Eagle Bar & Diner in Fitzrovia. That's not to mention the obvious stalwarts: Crepeaffaire, My Old Dutch Pancake House and Creme de la Crepe.

What else is going on? Let us know the ones we’ve missed in the comments below...