Threads at Unit 24 Gallery: Taking Art to the Drycleaners

By Londonist Last edited 134 months ago
Londonist Threads at Unit 24 Gallery: Taking Art to the Drycleaners 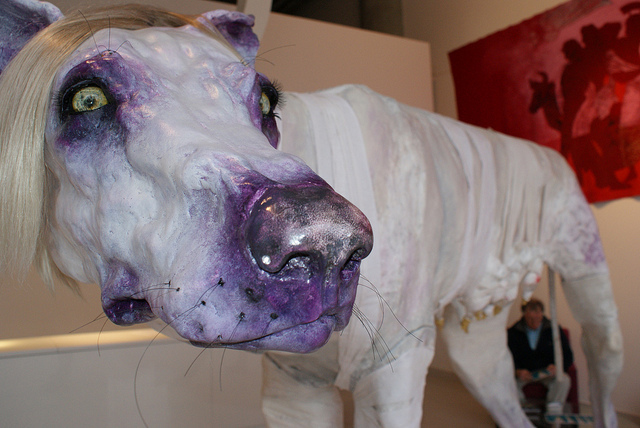 Nestled amongst the shiny new developments behind the Tate Modern is the unassumingly named Unit 24 Gallery, but you would be forgiven for missing it, as it is housed within an ultra-modern dry-cleaners named Spots. This unusual hybrid of drycleaner-cum-art-gallery typifies the London spirit of DIY, improvisation and symbiosis, innovation and out-the-box thinking. Far from compromising one another, these unlikely bedfellows sit well together:  the art pimping up the dry-cleaners and the dry-cleaners lending a brilliant quirkiness to the gallery (not to mention, one might imagine, making such a desirable area more affordable). It also has enabled Unit 24’s rather delightful strapline “taking art to the drycleaners”.

Currently on show at Unit 24 is a suitably odd exhibition called Threads. Promising interaction and metamorphosis by inviting viewers to change and adapt the works on exhibition, Threads is making Unit 24 the first stop on a tour of Europe. Such interaction is played out clearest with Lina Domarackas’ large painting on textile, from which emerges a line returning to a ball of wool, the audience invited to pull off a few lines of textile and return the painting back to the ball from whence it originally emerged, a playful notion of the ephemeral and continually recycling nature of stuff is perfectly placed within a working dry-cleaners. But this show is worth a visit for the centre piece alone, a huge wolf-type creature (albeit looking a bit cow-like) by Pawel Wocial named “Look at Me”, which (according to the press release) updates a “symbol of ancient empire” by adorning her with nail varnish, face make-up and perfectly trimmed hair. Magic, weird andrather brilliant.

So next time you’re Tate-ing it, and this place is so close it might as well be an extension of it,drop into Unit 24 for another angle on modern art, or drop off your drycleaning too.  Either way sure you won’t be disappointed.

Threads is on show at Unit 24 Gallery until April 15th at 24 Great Guildford Street, SE1 0ED.  Visit www.unit24.info for details.

Words and photo by Alex Chappel