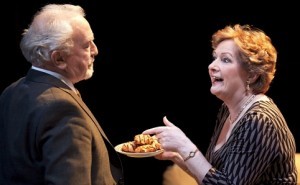 In the Rosenberg family home, David and Lesley prepare to host a dinner for a potential client that might finally secure them the contract that could save their once-thriving kosher catering company.  But there’s friction simmering from the get go: Jonny, their wayward son, is refusing to join the family business, preferring instead to focus his energies on an internet gambling scheme – when he’s not out getting sloshed and battering people, that is.  Meanwhile, his elder sister, Ruth, is putting the family’s reputation at risk with her investigation into war crimes in Gaza – a touchy subject for a family that treasures its standing in the close-knit Edgware Jewish community, and whose son, Danny, is a soldier fighting for Israel.  Particularly when it’s the eve of said son’s funeral.

Henry Goodman gives a tremendous performance as the quick-tempered but ultimately soft-hearted David, with Tilly Tremayne as his sometime sensible, sometime manic wife, Lesley.  Together, they turn hospitality into a form of abuse, thrusting unwanted cake, tea and macaroons down the throats of helpless visitors.  'You’re walking clichés, both of you', laughs the analytical, career-driven Ruth (an excellent Susannah Wise).  Alex Waldmann brings a welcome bit of rough, a hint of danger into the mix with Jonny, the black sheep of this orderly, middle class family.  In support, Stephen Boxer plays Ruth’s insouciant boss, and Paul Freeman blusters superbly as the self-important dinner guest, Dr. Saul.

Conflict of duty is at the heart of Laurie Sansom’s accomplished production.  Pulled in opposite directions by family obligations, loyalty to ‘the community’, and their responsibilities to themselves and their own principles, the characters in Ryan Craig’s new play are struggling to reconcile their differences and come to a better understanding of one another.  While politics is discussed, is even the focus of this drama, it’s not a political play – Craig doesn’t advocate one side or the other, simply represents the way politics can divide us so violently.  A fine, well-constructed play, if a little conventional in places.