The Little Book Of Tube Etiquette 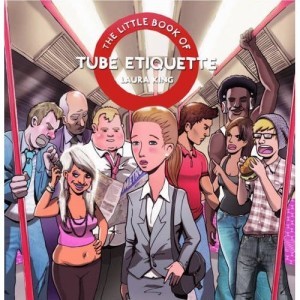 Laura King's Little Book of Tube Etiquette rounds up many of the everyday annoyances that London commuters will know well: the lady who insists on applying make-up, the fan of overly-loud headphone music, the scatterbrained tourist who stands on the left...

Other entries are perhaps more controversial. It is verboten for men to drunkenly flirt with women, we're told, yet women may inveigle a seat from a man by smiling sweetly. Meanwhile, men over 18 stone and women over size 20 should buy two tickets. This is edging into dangerous territory.

Don't eat. Don't drink (except water). Don't converse with the person opposite, even if they're a friend. Don't show affection. Don't laugh out loud... Like all 'etiquette' books, the incessant manifesto of intolerance can be grating, but it also captures what we're all thinking, and does so with good humour. A series of rather wonderful illustrations by Pete Duffield further tips the tone from self-righteous to tongue-in-cheek

The book's best ideas are saved for the end. The author advocates a yellow and red card system whereby hidden 'Tube detectives' would shame  miscreants with an impromptu booking. There's also a small section on humorous Tube announcements and tips for getting your own back on rule breakers.

A couple of tricks (at least) have been missed. A checklist of misdemeanours might have been fun, allowing readers to play Tube etiquette 'bingo'.  And there's no mention of the perennial debate over whether it's good or bad practice to leave your newspaper behind when leaving a train.

If you've got a copy of Mecca Ibrahim's One Stop Short of Barking, then you've seen most of this before. Otherwise, this is an entertaining little volume that would both serve the exasperated commuter market and act as an 'instruction manual' for new Londoners and tourists.