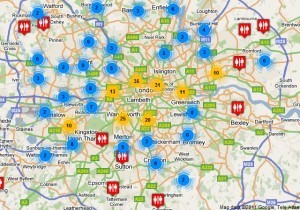 Most Useful Post Of the Week
A Map Of London's Public Toilets by Ian Visits
Not so much for the blog post, but the resource it points to. Ian's mapped over 900 public lavs, mostly in London, but with many inclusions in the surrounding regions. He's not the first to attempt the feat, but with mini-reviews, opening times and the sheer scale, this staggering work should be bookmarked by every Londoner and tourist. The site runs on a normal computer and special versions are available for smart phones.

Best History Post Of The Week
Mickey The Midget, Hero Of The Blitz Shelters, by Spitalfields Life
The Blitz threw up hundreds of stories of personal heroism and widespread suffering. The Spitalfields area offered particularly harsh conditions for those seeking shelter. Some would sleep inside the centuries-old coffins beneath Christ Church, after clearing out their rotten occupants, others would pile into the overcrowded, pest-ridden den of iniquity, which was the  London Fruit and Wool Exchange. Spitalfields Life pulls out the story of Mickey Davies, one of the volunteer wardens who tried to bring order out of chaos. Another post on the site, about Bunhill Fields, is also worth a read.

Best Transport Post Of The Week
Dull London Train Journeys, Number 1, Around The Overground by 853 Blog
To 'celebrate' the opening of the new link between Dalston Junction and Highbury and Islington, Darryl decided to circumnavigate the capital by train. His mini-adventure took nearly three hours, and needed a short break at Shepherd's Bush to placate his Oyster card.

Honourable mention: London Muse digs out a 12-year-old audio tour of Whitechapel and puts the walk through its paces.

Best Interview Of The week
Hitler? "He Was Just A Little Man In A Big Uniform" by Inside Croydon
The blog takes time out from its usual coverage of local politics to speak with Dorothy Tyler, a two-time silver medal winner at the Olympic high jump, now in her 90s. Tyler competed in the 1936 Berlin games, and attended a party hosted by Goebbels and Hitler. She's still competitive today, winning the over-80s national golf tournament on three occasions. A remarkable lady and a remarkable read.

Best Idea For A Mad Pubcrawl Of The Week
Join The Fitzrovia Crawl From 28 March To 2 April by Fitzrovia News
Hats off to Fitzrovia News who blew our 10-pub East London Line crawl out of the water, with this tour of all 46 pubs in the Fitzrovia area. They've even created their own hand-drawn map of the route. Sterling work.