Ticket Alert: Half Man Half Biscuit 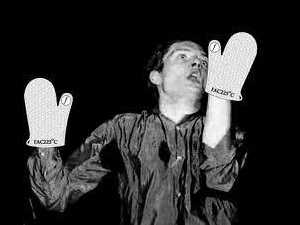 Fresh from saving Radio6 from oblivion (albeit involuntarily), Half Man Half Biscuit are making a rare sortie to the capital to bring us their chucklesome alt-folk.  Tickets went on sale at noon today for their show at the O2 Shepherd's Bush Empire on 17 June.

As well as the now-famous "Joy Division Oven Gloves", expect new song "Tommy Walsh's Eco-House" as well as "Bad Loser On Yahoo Chess", "Venus In Flares", "We Built This Village On A Trad Arr Tune", "Turned Up Clocked On Laid Off" and the ultra-short "Vatican Broadside".

For a taster of their recent efforts, see below for a fan-made video to their song "Restless Legs", which owes something to David Lynch's surreal classic Eraserhead.