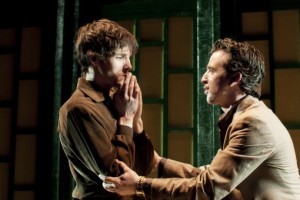 Written by Colombian playwright Pedro Miguel Rozo and translated by Simon Scardifield, this black comedy is competently acted and has some successful, unconventional stylistic choices, but the story is hackneyed and the writing shallow.

In a small Colombian town, a 60 year old man (Anthony O’Donnell) stands accused of sexually assaulting a 12 year old boy.  His sons, Carlos (Colin Morgan), a bipolar compulsive fantasist, and Sergio (Eugene O’Hare), a wealthy young businessman, set out to uncover the truth about their father, while their mother (Ishia Bennison) desperately clings to the safety blanket of her self-imposed ignorance in a bid to save the family’s reputation.

Some of Rozo’s choices are interesting.  The fourth wall is repeatedly broken as his characters direct their inner thoughts to the audience — some as comical asides, others as extended spotlit rants — and these interruptions are skilfully and smoothly incorporated into the action without undermining the integrity of the piece.  But his attempts at subtext are less deftly managed and the hints dropped in the text are heavy-handed. (“Do you really think I could do anything to an innocent child by force?”)  The language is direct and surface-level, as though Rozo has focused more on the plot than the characters.  “You sound like a bad soap opera”, is an accusation that becomes a refrain — and fittingly so, with clichés like: “It’ll be our secret”, “You knew what he was up to, mum, and you never did anything”, etc. “Very original”, scoffs Sergio.  Quite.

Still, it is well-directed by Lyndsey Turner; scenes bleed into each other seamlessly so the action never stops and the energy never drops.  The actors, too, do a good job with a script that sometimes feels slightly unnatural and rudimentary; Morgan’s twitchy, vulnerable Carlos is particularly magnetic (in an attractively Ben Wishaw-esque way), there’s a nice comic turn from Adrian Schiller as the money-grabbing psychiatrist, and Bennison does well in bringing credibility and motivation to the materialistic, TV-obsessed mother.  Ultimately, though, Rozo has nothing new to say about a subject that has been done to death, and the predictability of his ending robs it of its shock value and leaves us rolling our eyes.