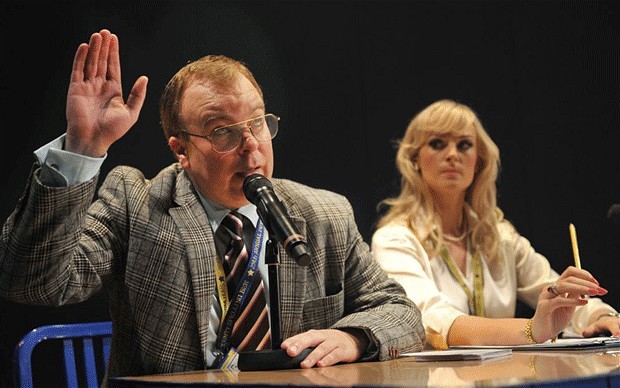 We expect a lot from our Donmar. Under Michael Grandage’s stewardship we’ve had star turns from the Jude Law Hamlet to the Derek Jacobi Lear (currently playing Llandudno which shows true dedication), fresh as paint translations of The Wild Duck, Accidental Death of an Anarchist and Phaedra, envelope-pushing exports such as Red, Piaf and Creditors and a clutch of successful Sondheims.

It seems faintly bizarre that as his swansong, Grandage should select 25th Annual Putnam County Spelling Bee.  For all its Gleeky zeitgeist, it’s a thin and trite one-act musical based around the slightly creepy public competitions which attract the unsporty and dentally-braced from America’s high schools.

Its cloying annoying moralising, feeble spoofing of the American competition ethic or naked ambition is too wearisome for analysis.  Relax and try to enjoy the fun which is increased by the co-opting of three or four audience members to the stage as additional spellers.

The book, by Rachel Sheinkin, follows a more simplified path than the movies Spellbound or Akeelah and the Bee and the Donmar is brightly transformed into a school gymnasium adorned with blue and yellow pennants, but the characters are as one-dimensional as South Park cartoons and form a box-ticking minority list of overachieving Asian, chubby boy scout, gay geek, straight geek, neglected daughter and right-on feminist.

They’re marshalled by the under-used Katherine Kingsley in a leggy blonde hommage to Sarah Palin's pageant queen vacuity, partnered by an excellent Steve Pemberton (a long way from Benidorm) as the Vice Principal with a nice line in withering put-downs and sardonic definitions for the spelling challenges.

Apart from a momentarily catchy title song, the music – by William Finn – is peppy but forgettable, which is a shame because the young actors have good voices and attack the songs with gusto.

On that subject it’s worth noting that there’s possibly no-one in West End theatre who works harder than Grandage’s long-time collaborator as Casting Director Anne McNulty to unearth aspiring talent.  From drama schools and provincial profit-shares she has found at least three highly promising young actors: David Fynn as the pudgy know-all boy-scout, Hayley Gallivan as the wistful romantic Olive and Chris Carswell as a home-schooled hayseed all exhibit strong singing, nifty footwork and a total commitment to the project. Hopefully they’ll each get better projects soon.

Incidentally, some of the words used to test the audience members don’t actually appear in Merriam-Webster’s American dictionary, and we suspect cheating.  Haseholes.

25th Annual Putnam County Spelling Bee continues at the Donmar Warehouse until 2 April, Monday-Saturday at 7.30pm and Wednesday and Saturday matinees at 2.30pm.  Unusually for Donmar productions, it's not completely sold out and tickets are currently available on 0844 871 7656.  Tickets £10 to £32.50.  Runs 1 hour 35 minutes without interval.