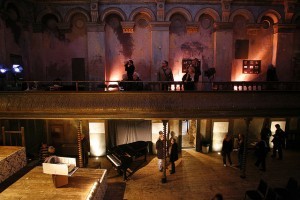 In 2003, Kevin Spacey took over as artistic director at the Old Vic and attracted a raft of Hollywood talent including Jeff Goldblum, Robert Altman and Richard Dreyfuss.  Could the same happen to the East End's Wilton Music Hall?

Speaking to us before he hosted the inaugural Off West End Awards, we asked famous thesp Simon Callow if he had any intention of mimicking Spacey.

If somebody asked me if I would like to take over the Wilton's Music Hall as artistic director, I would find that a very hard thing to say no to because it's the most beautiful space in Britain and, maybe, one of the most beautiful theatre spaces in the world.

When asked about how he would use the space, the Streatham-born actor said:

There would be no limit at all. Opera, which has been done here, ballet, whatever. There's no limit.

Image of Wilton's Music Hall by James Guppy in the Londonist Flickr pool.