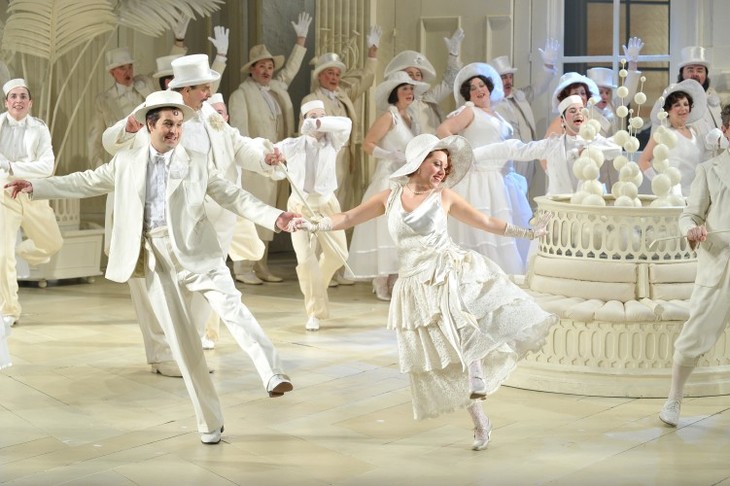 Though the comical story, which sees everyone trying to escape execution including the executioner, is nominally set in Japan, all of the jokes are about English values. Miller consequently takes the decision to set the action in 1930s England with a dashing white, and slightly surreal, set.

There are some weak moments. The three little maids’ song is static as the principals remain seated throughout, while conversely the singing of the beautiful madrigal is marred by visual distractions. With the insertion of a dozen dancers, however, this is undoubtedly a dynamic production that combines the professionalism of English National Opera with a healthy dose of panache.

The old hand Richard Suart is marvellous as the snivelling Ko-Ko, whether he is acting the tennis playing twit, billiard shark buffoon or wretched white suited suitor. As Yum-Yum Sophie Bevan phrases her central song wonderfully, while in the title role Richard Angas proves an incredible listener as he reacts to everything going on around him. In the pit Peter Robinson delivers a slick account of Sullivan’s score, although there is too great a sense of urgency about the Overture.

There may be a hint of tiredness about this production after so many years, but this won’t be noticeable to anyone who hasn’t seen it before, and those who have will probably want to return anyway just to see this cast.