Inside The Brunel Tunnel Shaft 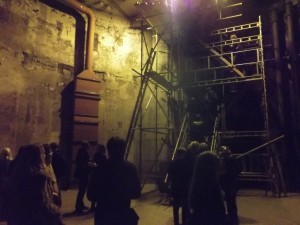 We take a tour of the old entrance shaft to the Thames Tunnel at Rotherhithe, as it prepares to open again this evening to visitors.

If the Brunel Museum in Rotherhithe is not London's smallest museum, then it must be close. You can read every label and eyeball every artefact in 15 minutes. But this tiny shrine to Marc and Isambard Brunel and their famous tunnel under the Thames may soon get a whole lot bigger.

Anyone who has visited will have noticed a large drum-shaped structure beside the museum entrance. This was the original southern entrance to the Thames Tunnel (see gallery).

This space has been inaccessible since the tunnel was converted for use by trains in the 1860s. At this time, the interior staircase was removed and the shaft adapted for ventilation.

No longer. When the tunnel was upgraded during recent work to establish the London Overground network, a concrete raft was placed above the tracks and towards the bottom of the ventilation shaft. Where once was a void there is now a sizeable room. The museum now offer occasional tours, and tonight is one such occasion.

Eventually, the Brunel Museum intends to convert this new chamber into an exhibition and events space. It has some pedigree. The shaft is reckoned as the first 'caisson' in the world (i.e. a pre-formed cylinder of iron lowered by its own weight into the slimy Thames mud). During construction of the tunnel, a wall breach inundated the site, knocking Isambard unconscious and forcing his battered body up into the caisson where he was rescued. Ten other men were not so lucky and lost their lives.

Over the weekend, a somewhat incongruous 'Valentine's tour' gave  visitors access into the space. Entrance is via a narrow, stoopy passage followed by a precipitous clamber down a temporary stairwell. The walls are caked in Victorian soot. A helical band climbs the walls, showing the ghost of an old staircase. This, you'll agree, will make one hell of an events space.

The shaft is open again tonight for a final set of Valentine's tours. Museum Director (and naturally theatrical) Robert Hulse will regale you with the lurid history of the tunnel and bargepole in a few saucy quotes and innuendos about shafts, throbbing tunnels and a girl named Fanny. Marvellous fun.

Tours take place at 5pm, 6pm and 7pm and cost £5 (includes museum entrance). No need to pre-book...just turn up. You'll find the museum a short walk from Rotherhithe station, here.