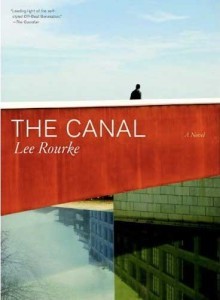 Joint winner of the Guardian's Not the Booker prize award in October 2010, we saw Lee Rourke also win the not so prestigious Literary Death Match Episode 7 reading a section of The Canal about the tedious joys of Pong. Whilst the game exemplifies a central theme of the book - boredom - it did little to prepare us for the substance of this existential tale.

Doing what most of us daydream about at some point, the nameless narrator decides one morning not to walk to work, but to hang out by the canal instead. Bored of the pointless grind of some sort of data processing, he drops out and spends the day on a bench at the border of Hackney and Islington, observing. On his second day of opting out, he's joined at the bench by a woman. As an odd daily routine develops, the woman confides her darkest secrets in the narrator, who is helplessly drawn to her.

Their strange acquaintance is intermittently disturbed by a gang of boys off the local estate, getting their kicks performing random acts of violence. Other characters familiar to anyone who regularly walks the canal, pass their way: a rambling tramp, a sweary dog walker and vodka laden migrant workers, as well as the rank and file of the daily commute. Workers in an office block opposite their bench can be easily watched. The narrator scorns the meaningless office life therein, preferring the activities of the canal waterfowl at the block's foot but the woman has a more intense and personal interest in what goes on in there. It soon becomes clear that the narrator has an intense and personal interest in her.

The strong sense of place suggests Rourke has spent many hours contemplating the canal from Wenlock Basin to the Rosemary Branch and long been familiar with De Beauvoir up to Essex Road. The canal itself - its water, wildlife, graffiti, junk and stench - is beautifully rendered, not excluding the towpath rule of 'two tings' from cyclists and the trendy lower-case signage flanking the hoarding of aspirational developments.

The novel explores the idea that boredom drives desire, and extreme boredom erupts in violence. The narrator thinks he's bored yet an obsessive interest in the woman and in things around him after he's dropped out of the 9-5, belies this. The change offers a different perspective revealing his love of the aircraft that fill the flight path above his house and knowledge of local history. The woman is different, however. She seems tired of life - constantly yawning and checking her watch - and yet the narrator's feelings for her blind him to the reality of her situation. The violent denouement is unexpected only by the narrator, although the form of that climax is surprisingly shocking.

Short and philosophical, The Canal deals in the everyday extraordinary and certainly will not bore you.

Like literary events? The Book Grocer knows what's on where.