Best Of The London Blogs: 13-19 February

Our pick of the very best in London blogging.

Most Helpful Post of the Week
10 Ticketing Tips, by Diamond Geezer
About a week ago, the official schedule for the Olympic Games was announced. About a month ago, the procedure for buying requesting tickets was announced. Weighing up which events to see, how much to spend and which events and venues are likely to be least over-subscribed is quite the strategic challenge. Lucky for everyone that Diamond Geezer has put together the most helpful guide available. 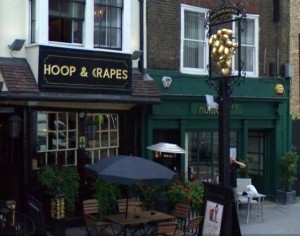 Best Historical Post of the Week
At the Hoop & Grapes, by Spitalfields Life
Drawing from a seemingly endless supply of East-End inspiration, The Gentle Author this week visited a famous Aldgate Pub with well over 400 years of history. The Hoop & Grapes pre-dates the Great Fire, and reckons to be the oldest licensed public house in the City. So far, so much standard pub guide. But, as always, Spitalfields Life digs much deeper, poking around in the 13th Century cellar, getting stories out of the landlady, and solving a longstanding puzzle about one of the ancient fittings. An absolute treat.

Best Political Post of the Week
Blackheath's Festival Organisers Speak Out, by 853 Blog
Proposals are afoot to hold a music festival in Blackheath in September. The unlandscaped open space might seem the perfect place to host a concert, yet a group of local residents are rallying to block it. Darryl Chamberlain talks to the three organisers behind the festival. He maintains an objective, journalistic approach throughout, deftly leaving opinions for the (excellent) comment thread.

Unlikely Blogging Milestone of the Week
The 100th Bollard, by Bollards of London
Or should that be 'blogging millstone'? Congratulations to John Kennedy whose monomaniac study of obstructive street furniture has just chronicled its 100th unique bollard. A handsome, flat-topped pillar from the City of London, since you ask.

Honourable Mentions
Ian Visits pokes around a 'secret crypt' beneath a church in Waterloo, Barnet Eye participates in a tragi-comic council meeting, The Great Wen visits a high-powered auction at Christie's and Annie Mole is looking for examples of Tube staff who make you smile.

We realise we're only scratching the surface here, and invite you to nominate your own favourite London posts from the past week — especially from newer or lesser-known blogs that might not have crossed our radar.