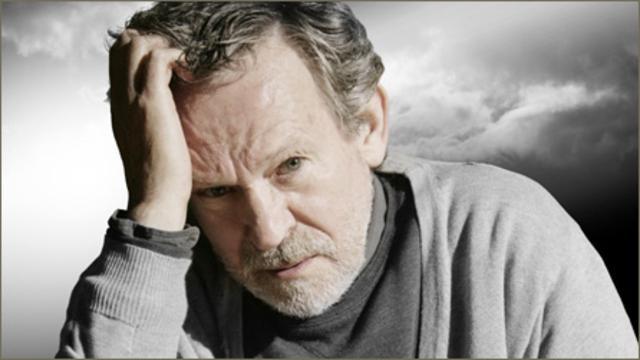 Fringe theatre had a great 2010 and this Sunday, the Off West End Theatre Awards are handing down their judgement on the best of last year.  We very much enjoyed Paul Copley's turn in Lulu at the Gate Theatre (nominated for 7 Offies on the long list) and he has returned to the London stage this week as part of the cast of the award-winning Winterlong at the Soho Theatre.  As well as his TV roles (including Minder, Life On Mars and Torchwood), he has been involved with fringe theatre for forty years.

How has the London theatre scene changed since you first acted here?
There's much more happening on the fringe and, on the whole, it's better paid - or at least paid; lots of fringe theatre was unpaid and unfortunately some still is. My first London theatre job was at the Little Theatre, an attic up three flights in St Martins Lane - long gone - and the pay was £5 total for rehearsal and the run of the premiere of Bleats from a Brighouse Pleasureground. This was long before mandatory risk assessments etc. and facilities were minimal for actors and audience.  Health and Safety? There was not much of either but exciting times and I wouldn't have missed a moment! There are many and varied fringe venues now - site specific shows to knock your socks off - and theatres like the Almeida and Donmar that set the bar very high indeed.

You first appeared in Lulu in 1971. How did it feel to be doing that play again after all this time?  Is this adaption much different given how society has changed in the meantime?
Lulu is special for me because, playing schoolboy Hugenberg in Bill Hays' production at Leeds, I met Natasha, my wife, who played Lulu. Times change but, for all our progress, human brutishness still surfaces as we know. Society still has the capacity to be sexually exploitative, and, depressingly, the use and abuse of innocence seems to be as prevalent now as in Wedekind's time at the end of the nineteenth century.

Have facilities in fringe theatres changed for the better?
In the 1970s and 1980s at the Bush Theatre it was necessary to walk outside to reach backstage.  Before and during the show, in costume (spare a thought for actors in bedroom scenes in midwinter), one had to walk (sometimes dash!) through the pub, round to the large side doorway on the main street.  This doorway could pose problems, often in use by locals nattering, lovers snogging and sometimes by revellers urinating!  Having negotiated that lot and safely shut the door behind you it was necessary to climb the stone stairs in darkness and assume your character sometimes seconds before making your entrance.  An actor prepares!  Great improvements have been made at the Bush backstage and front of house and it's still one of the most exciting and innovative theatres in London.

Would you say London theatre is now more celebrity-led?
The West End has always looked to stars and celebrities to draw audiences.  These days there is some very strange casting in some quarters that is solely aimed at autograph and celebrity hunters.  However, this year and last, straight plays and quality dramas have drawn large audiences and these will always need talented, experienced and/or well trained actors to deliver them, be those actors stars or not.

Do you have a favourite London theatre?
The Bush must come high in my list of favourites. I've had three of my own plays produced there as well as acting in six plays there between 1977 and 2003, so a long association with a really vibrant and dynamic organisation punching far above its weight for decades.

Shakespeare's Globe is a brilliant achievement and great for both workers and watchers.

The Mermaid I remember very fondly and The Gate has a terrific intimate atmosphere.

Are there any differences in audiences in London compared to elsewhere?
Perhaps more is expected of plays that premiere in London and therefore more from the actors involved. That was certainly the case when I first came to London when it was considered ambitious to carve a career in the capital city.  Now, with New York and LA being seen as the ultimate goal for many in show business, things have shifted slightly.

Terrific work is mounted in all parts of the country - Stratford, Birmingham, Liverpool, Manchester, Leeds etc. etc. - but success is still measured to some extent on the critical acclaim or otherwise given to a show when it 'comes in' to the West End.

What are your favourite places to visit in London?
The Isabella Plantation in Richmond Park - in early May it outdoes the Chelsea Flower Show for sheer and wonderful natural beauty.

And I never tire of the bustle of Covent Garden.

If you could turn one building in London into a theatre venue, what would it be?
One of those lovely old Victorian swimming baths - Porchester Baths or similar. I love swimming and water and plays could be found and commissioned - lousy acoustics though!!!

Do you have any interesting London theatre stories?
Yes... and a few that I can share!

In 1992 at The Thorndike, Leatherhead playing Feste singing 'The rain it raineth...' I unconsciously reverted to the tune I had sung in a previous production and wondered what the bewildered looks from my colleagues were about.

Watching Natasha, my wife, at the Young Vic in The Real Inspector Hound I nearly had a heart attack when, running off stage, she collided with a pillar holding the building up. She all but knocked herself out rendering both of us near stretcher cases!

And, continuing the theme of the unforeseen happening, whilst playing Kent in King Lear at The Globe, I had the misfortune to have my finger split open during a stage skirmish. This was just before being put in the stocks by Cornwall. I hid my grisly blooded hand from the audience by putting it behind my back where it stuck to my breeches. Having been 'stocked', a kind colleague came on stage and surreptitiously tried to apply first aid with a band aid. All I could hear was him muttering under his breath - 'Oh No... F***ing Hell!' He returned on stage with a bigger plaster - we finished the show and I was congratulated for carrying on when actually it was so numb I couldn't feel a thing - even when it was stitched up later!

Do you have any theatre tips would you pass onto Londoners?
Suck throat sweets, turn off your mobiles...and keep turning up in your enthusiastic droves because we really appreciate your support!

"If you ever need a reminder of the power of theatre, this is it." Our review of Lulu.

The official site of the Off-West End Awards.

We'll be going behind the scenes of the Offies this weekend.  Watch this space for more news!