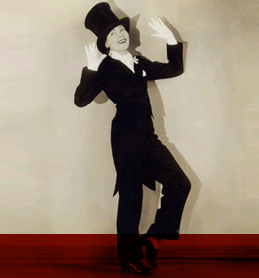 Over the last couple of years we've very much enjoyed Ian Marshall Fisher's Lost Musicals series brightening up our Sundays from March to August. Performed at Sadler's Wells Lilian Baylis Studio, Lost Musicals each year hunts out three works by acclaimed America's theatre writers and composers that have been forgotten about or lost in the present day. Often parts have gone missing over time, but after considerable work by Marshall Fisher the shows are performed again, in black tie, with no changes to, or as close to their original material as possible.

The season launches on 27 March with The Band Wagon, performed on stage for the first time since 1931, although now it's most famous for Fred Astaire's show-stopping dance routines in the MGM film of the same name. We move later to 1969 for the second show (from 15 May) which can even claim the title of a European premiere of 1969's Coco. With music by André Previn and the book by Alan Jay Lerner, Coco will happily sit into today's fascination with Chanel, as it tells the story of her dilemma as a woman in her 60s trying to maintain her reign as a leading designer in the youthful world of fashion.

Finally, Lost Musicals' favourite Cole Porter is the composer behind the third show of the season - 1944's Mexican Hayride with book by Herbert and Dorothy Fields. Telling the story of American Joe Balscom, a fifth rate racketeer who mistakenly becomes a Mexican hero, Hayride was one of the biggest shows of its time but has barely been performed since.

Although casting details are not yet announced, the cast normally is filled with West End regulars often with a couple of big names. Tickets for the musicals are from £22, with a £4.50 discount if you book for all three. Full details at the Sadler's Wells site.