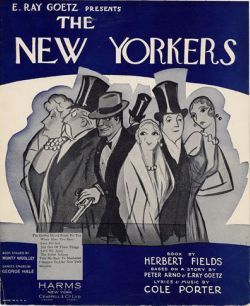 Musicals come and go. The lucky ones get turned into films and are immortalised. Everyone's heard of Oklahoma!, Anything Goes and Guys and Dolls. But what about Allegro, Nymph Errant or Greenwillow? No, us neither.

Since 1989 Ian Marshall Fisher has been a one-man musical preservation industry, every year dredging up unfairly forgotten shows by the great writers of the early 20th century and labelling them the Lost Musicals. His latest project at Sadler's Wells (Sundays until April 26) is Cole Porter and Herbert Fields' 1930 society satire The New Yorkers. What hits you first is the minimalist approach. Smartly decked out in evening dress, the company files onto a brightly-lit stage - empty apart from a row of chairs. Each clutches a black folder containing the script. There are no props and only piano accompaniment. It's almost like watching an early BBC radio drama recording. But the performances themselves are boisterous, especially from the remarkable Michael Roberts in a role originally taken by Jimmy Durante.

There's a negligible plot: wealthy young New York socialite falls for shady nightclub owner and ends up organising a jailbreak when he is busted. This being the Prohibition, there are plenty of jokes about alcohol and the lengths people will go to for it, including an entire song, 'Say It With Gin'. The links between the revue-style numbers and story are sometimes tenuous, but sometimes that helps: after one particularly rowdy comedy routine, Corrie Mac steps forward and sings 'Love for Sale', Porter's great, sad song about a prostitute. The effect is devastating.

What's most surprising though is how funny the show still is. Yes, some of the contemporary references are missed, but the acidic swipes at the uber-rich, the justice system, and above all lovely 'liquor', still have the power to raise a laugh. If something as classy as The New Yorkers can be lost, what other musical marvels might still await rediscovery?

The New Yorkers plays each Sunday at 4pm until April 26. Full details here. If you only see one show this month, this should be it.