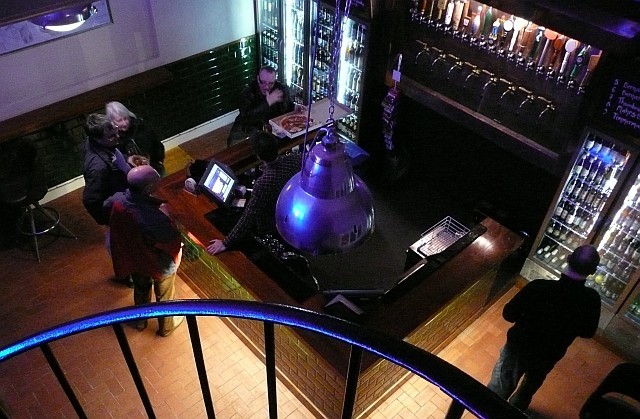 Welcome to our ongoing mission to explore what London has to offer the discerning lover of excellent beer – from pubs and retailers that take pride in the quality of their hoppy offerings, to local breweries and beer events. In this instalment, we drink UK, American and European beer in a large stone box...

In front of Euston station, close to Euston Road, is a large cuboid structure – essentially an odd square building made of Portland stone. Less incongruous than it sounds, it is a Grade II listed remnant of the original 19th century station, once an entrance lodge, subsequently a 'women-only' bar, and now... the Euston Tap.

On a snowy Monday evening last month, we walked past a scattered handful of tables and chairs outside the building (presumably catering to those looking to enjoy the peaceful ambience of Euston Road) and through a couple of imposingly large doors. Inside, we found an unsurprisingly square and high-ceilinged space with subdued, coloured lighting and a relaxed atmosphere. A couple of obvious beer-spotters were stationed at a central bar, which drew attention to two rows of taps set into the wall – one row comprising eight cask ales, the other featuring twenty keg beers. As if that wasn't sufficient, the bar was flanked by two huge fridges of bottles – one featuring American imports and the other concentrating on European brews. We thoroughly approve of this arrangement.

After some lengthy deliberation, aided by a friendly (but somehow mildly bemused) barman, we selected a round of beers and climbed a spiral staircase to the upper floor. The layout and décor here was a considerable contrast to the ground floor, with lower ceilings, brighter lighting, seemingly unfinished walls (or maybe just a dodgy beige paint-job), no windows and the venue's sole toilet. The upper floor was also home to most of the seating options and, on our visit at least, several dozen crates of beer stacked in a corner.

Concentrating hard on the beer, we tried a few pale ales from Anchor (classic citrussy American hops), Brew Dog (unsurprisingly full-on, almost treacly) and Founders (bitter but smooth, belying its strength), as well as a Black Rocket Double IPA (smooth roasted coffee) – all good. Closer to home, we also grabbed a pint of Bath Ales Barnstormer, a great session ale with aspects of butter and vanilla.

Whilst most of the UK beers seemed averagely-priced for central London, prices for the imported American beers were considerably higher. This is to be expected – importing craft beers from the USA is not a cheap undertaking. We did take advantage of a 'Pumpkin Ale Special' offer (possibly a legacy from Halloween?), giving us an opportunity to compare two bottles of American pumpkin-based beers – one Saranac and one Post Road (brewed by Brooklyn) – for £6 for the pair. Both were pleasantly spicy, but the Saranac was a bit smoother.

To soak up the beer a basic variety of snack foods were available, although sadly there was no evidence of pork scratchings. The venue is clearly too small to incorporate a kitchen, but it nonetheless seemed to be possible to procure pizza by some obscure means.

For hop-lovers, the Euston Tap is a no-brainer, with a magnificent variety of UK and imported beers and an interesting and well-connected central location. We'll certainly be returning.