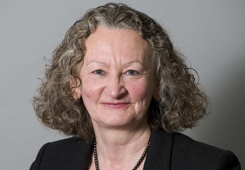 Jenny Jones, one of two Green Party members of the London Assembly, will put herself forward as Green candidate for next year's mayoral elections. Her running mate will be Darren Johnson, the other Green at City Hall. Both have represented their party on the Assembly since its inception in 2000. Other candidates are likely to come forward, and a final decision will be made by ballot in March. The winning candidate will follow in the footsteps of Sian Berry, who represented the Greens in the 2008 elections.

This could be a good opportunity for the Greens. If voters prove apathetic to another Boris versus Ken slap-off, and the Lib Dems are still languishing in the national dog house, there may be space for an alternative party to make headway. While we're unlikely to see a Green mayor anytime soon, it will be interesting to see if the party can raise its profile with Londoners throughout the campaign and during the Assembly vote.