In Pictures: I Goat, A New Sculpture For Spitalfields

By Dean Nicholas Last edited 129 months ago
Dean Nicholas In Pictures: I Goat, A New Sculpture For Spitalfields 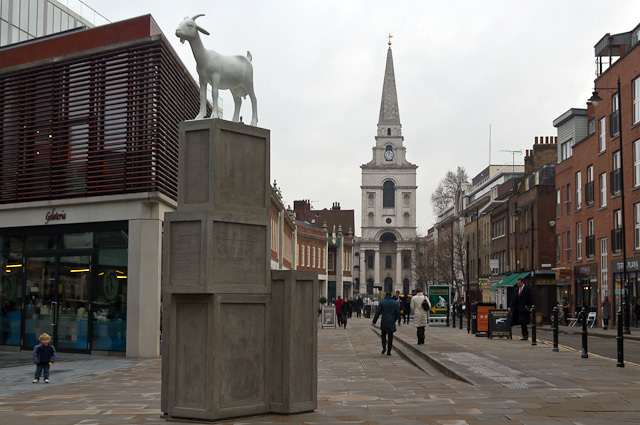 This morning, I Goat, a permanent new sculpture in Spitalfields, was unveiled.

The 3.5m artwork by Kenny Hunter, which won a publicly-voted competition from a shortlist of other potential sculptures, takes the form of a goat standing atop several packing crates. The animal's flawless white surface is just crying out to be graffitoed by the various wannabe street artists who inhabit the area; we give it until the weekend before it's been defaced.

Hunter's caprine piece is said to represent the waves of immigrants that have marked this particular area of London, and to reflect how they have "faced their own form of conflict, oppression and poverty." All well and good, though the look on the goat's face doesn't exactly suggest he's had a life of particularly hard knocks.

I Goat is part of several ersatz animal attractions in the vicinity, including Paul Cox's oversized white rabbits, the various graffiti fauna by Roa, and of course the Heron tower, which was originally set to be topped out by the bird that leant its name to the building. And that's before we even get into the annual Oxford vs. Cambridge Goat Race at Spitalfields City Farm...

See also: pictures of I Goat being installed.