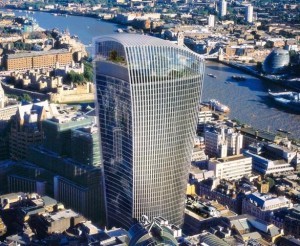 London's most bulbous new-build is under construction following the ground-breaking ceremony for 20 Fenchurch Street yesterday.

The top-heavy tower, dubbed the 'walkie-talkie', has drawn strong criticism for its unusual form, which some see as ungraceful and overbearing. Others admire the building for its daring profile and the prominent public sky garden, which will grace the upper floors.

When completed in 2014, the tower will rise 160 m above the City. While this is small fry compared with other recent developments (Heron Tower is 230 m, for example), its position close to the river and slightly away from the other City towers will lend it some prominence from, say, the South Bank.

Ground work will now begin almost immediately, but don't expect to see anything loftier than a basement until early next year.

Follow this building's progress on the Skyscraper Cities forum.