Theatre Review: A Flea In Her Ear @ The Old Vic

By Zoe Craig Last edited 140 months ago
Zoe Craig Theatre Review: A Flea In Her Ear @ The Old Vic 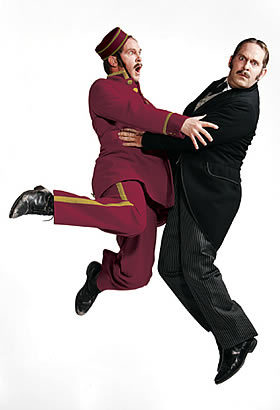 No panto for the Old Vic this Christmas. Instead, A Flea in Her Ear is a 1907 French farce by the master of the genre Feydeau, in a translation by the late, great John Mortimer.

And although you don't get to shout "He's behind you!" at any time during this show, you still get the right dose of festive fun: mania, misunderstandings, crisp comic timing and classic chase scenes combine to make a brilliant night's entertainment.

The ridiculous course of events is set in motion by Raymonde Chandebise, who, believing her husband is unfaithful, sets him a trap along with her best friend Lucienne. (The reality is easily explained away early on to Doctor Finache: Victor Emmanuel Chandebise is just having a little downstairs boudoir trouble.) Lucienne writes a perfumed letter, inviting Victor Emmanuel to the seedy Hotel Coq d'Or (pronouced with heavy emphasis), to meet a mystery admirer. Victor Emmanuel then innocently shows the epistle to Lucienne's insanely jealous Spanish husband, who recognises his wife's handwriting, and sets off, pistol in hand, to kill her.

More silliness ensues when the characters converge on the Coq d'Or, an Art Nouveau labyrinth of slamming doors, spiralling staircases and spinning beds, complete with a hall porter who happens to be the spitting image of Victor Emmanuel himself.

Tom Hollander is absolutely fantastic as both the stiff Victor Emmanuel and the porter Poche, vaguely described at one point as "a sort of alcoholic mess." His expert physicality almost renders the split-second costume changes redundant: the wide-eyed, goofing Poche with his masochistic desire to please is so incredibly different to the prim, respectable insurance company head who keeps getting kicked up the arse by the hotel's nutty ex-military proprietor. It's a virtuoso performance that had us blinking and grinning in equal measures of awe and disbelief.

He's backed up by a wonderful cast who keep their caricatures just the right side of cartoonish. Kudos to John Marquez's "espaneesh" Carlos, rrreeediculous from the brim of his silly hat to the tips of his Cuban heels. Equally funny are Jonathan Cake as a dashing Disney-esque lothario, more jaw than brain, and Lloyd Hutchinson as the hotel boss with a penchant for punishing people's posteriors.

And around this great team is an incredibly hard-working production. It takes a lot to make comedy this complicated look simple; when you can get a gunshot to ricochet off the boob of a nude sculpture, *and* maintain the pace in a script this good, you know you're onto something special. If you love farce, you'll love this.

A Flea In Her Ear plays at The Old Vic until 5 March. Visit www.oldvictheatre.com for more information, and to book tickets. Don't forget, if you like or work in Lambeth or Southwark, or you're under 25, you're entitled to discounted tickets.