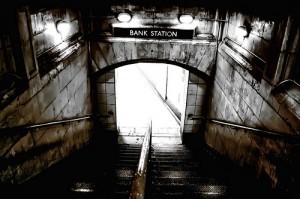 London Underground is consulting with the City of London on a long-term plan to re-tunnel parts of Bank station, in a major effort to reduce congestion on what is one of the capital's busiest Tube interchanges, and almost certainly the most difficult to navigate.

A station so big they named it twice (it is often known as the 'Bank-Monument Complex', in recognition of its sister station), the history of Bank is, much like the history of the Underground itself, a muddled tale. Constructed in 1900 as part of  the City & South London line (now the Northern line), to replace a nearby terminus at King William Street, it was joined in the same year by platforms that served what was then called the Central London Railway. In 1902, it welcomed the Waterloo & City line, and was soon yoked by an underground tunnel to the existing Monument station. Within a short space of time, three stations had become one, and the addition of the DLR platforms in 1991 further complicated matters. This map gives an idea of the labyrinthine layout beneath the City's streets.

The plans would include re-tunnelling the Northern line, giving the platforms step-free access in the process, and constructing a new entrance on King William Street. This would complement a scheme to build a new step-free entrance to the Waterloo & City line, which is already underway. If approved, work would begin in 2015, for completion in 2021. Ominously, the press release doesn't give any indication into what kind of disruption to the already overstretched station the work would require., However, there is a warning from Richard Parry, LU's Strategy & Commercial director: if the work isn't done, then measures such as closing the station during busy periods — something that already happens on occasion — will become more routine.

Welcome as these changes (once complete) would be, they arguably don't go far enough. As one of the key stations on the network, Bank is often included in speculative extension programmes, most notably through its DLR platforms. A 2005 document called DLR Horizon 2020 investigated various options for extending network westwards from Bank, including links to Charing Cross via Aldwych and a loop via Barbican and Cannon Street. The plans were notional even when drawn up in the relatively flush days of the mid-Noughties, and are even less likely in today's austere climate, but they such stuff that the commuters of tomorrow can dream on.