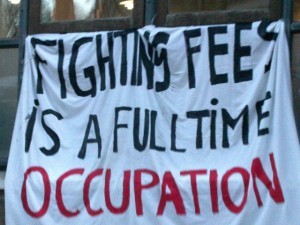 Sixth formers at Camden School for Girls began a 24-hour occupation and teach-in at 9am this morning as part of the national day of action against education cuts and fees.

The students are demanding that the school management make a public statement opposing the tuition fees increase and the abolition of the Education Maintenance Allowance, and support future protests.

The sit-in has received support from university student campaigners, and MPs John McDonnell and Caroline Lucas. Green party leader, Lucas, said, “I want to applaud you for standing up for a fair education system and for opposing cuts to other key public services. A new movement is being born and is determined to show that another world is possible – thank you for being part of that and I hope you know that you are making a real difference.”

Elsewhere in London, Islington Sixth Form College has closed for the day after management heard about plans by students to stage a protest sit-in.

University students at the Royal College of Art in Kensington and at Birkbeck college in Bloomsbury occupied campus buildings this morning.

The National Union of Students women's group are protesting outside the constituency office of LibDem MP Lynne Featherstone.

Other protests are happening across London, and nationally, over the rest of today and there are reports of a heavy police presence across the city. At least 40,000 protesters are expected to take part in demonstrations around central London tomorrow as MPs vote on tuition fees proposals.