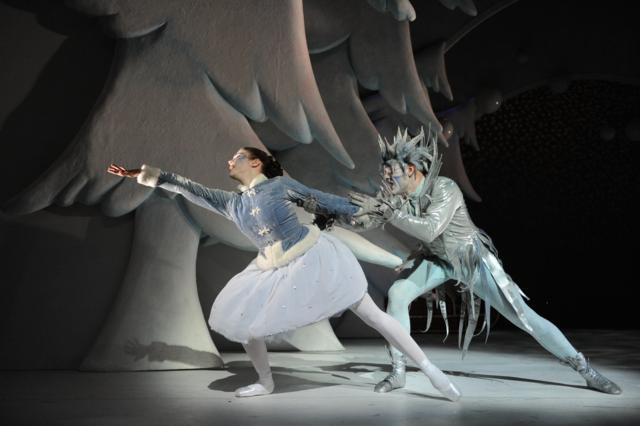 The Snowman and Christmas go together like snow and TfL apologies so it's unsurprising that this largely wordless adaption by the Birmingham Repertory Theatre of Raymond Brigg's 1978 graphic novel is returning to Sadler's Wells' Peacock Theatre. There is no doubt that this is a children's classic: the theatre is packed with rugrats of all ages accompanied by parents who probably saw The Snowman as children themselves. Many of the kids are no newbies; "this is my favourite bit" was a common comment and they all seemed to know when and who to cheer and boo throughout the Boy and Snowman's adventures.

This being Sadler's Wells, it's no surprise that much of the plot is delivered through interpretative dance to a score by Howard Blake that is kept light and jaunty throughout like a particularly happy Morris dancer on a treadmill. In the first half, the central duo lark around the Boy's house; we watch the Snowman play with the Cat, hold a limbo contest for the tropical contents of the fridge and dress up in the Boy's parents' room.

The money shot comes just before the interval with the show's signature tune sung by Susan Monnox. If the much-covered Walking In The Air doesn't melt your heart as the pair are lifted high above the stage then there probably wasn't a heart there to begin with. The second half is darker than the first as this innocent bromance continues to the North Pole. Santa makes an appearance ("yay!" go the kids) as does the villain, a jumping Jack Frost ("boo!") who fights over the Snowman for the attentions of the Ice Princess until a Scottish snowman artfully applies a Glaswegian kiss ("yay!" again). The normally mawkish ending is brief; soon after meeting his watery grave, the Snowman re-appears with the rest of the cast for a celebratory hoedown by way of a goodbye.

The number of youngsters of all ages in the audience is testimony to this show's role as a rite of passage for every British child of the last generation. This dance adaptation with elements of ballet and tango panders to a young audience - tongues are firmly kept out of cheeks - and, as family-friendly fun goes, it's a complete success.

The Snowman is playing until 9 January. Tickets are £12-32 and available online, in person or by telephone. Family tickets, group discounts and school discounts are available.