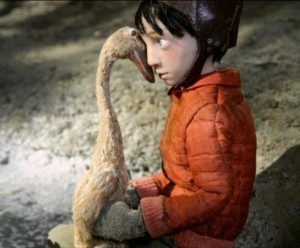 There's something unique about Jarvis Cocker.  Even those too young to remember his mid-nineties heyday as the singer for eclectic indie popsters Pulp (due for a reunion in 2011) will be charmed by his turn as quirky English eccentric.

Following in the footsteps of David Bowie, David Attenborough and Sean Connery as narrator of this seasonal favourite, he was dressed in monochrome (brown tweed suit and brown striped shirt beneath his mop of brown hair), he arrives on stage in front of a very different bunch of musicians - the seventy-strong Philharmonia Orchestra conducted by Allan Wilson who vividly bring to life the mood, drama and characters of Sergei Prokofiev's masterpiece.  Behind us is another orchestra, this time of sniffles, coughs, whispers and the occasional crying, but none of this affected the sheer charm of the show, especially once Jarvis got into his swing.

Nobody can say that the Southbank wasn't prepared for this very kiddy-friendly show.  As well as a dedicated "buggy park", there is an excellent free pre-show with Luke Crooke who, with members of the Philharmonia Orchestra, gives children an introduction to the characters of Peter And The Wolf before the show proper began.

The show itself has an usual format.  The narrated version of the story shorn of visual imagery is followed by a wordless animated version, once again accompanies by the orchestra.  The second part, a "Brucie Bonus" as Jarvis put it, is the Oscar-winning production by Suzie Templeton with many comic touches.  We think the younger children enjoyed the latter version of the story more but both parts were highly polished introductions to classical music.  The only possible downside for parents is having to listen as their offspring whistle Peter's Theme on repeat.

If you're quick, you can see the last performances of this show today at 2pm and 4pm.  More information on the show and ticket details are available here.

For a sample of the animated version of the story, see below.