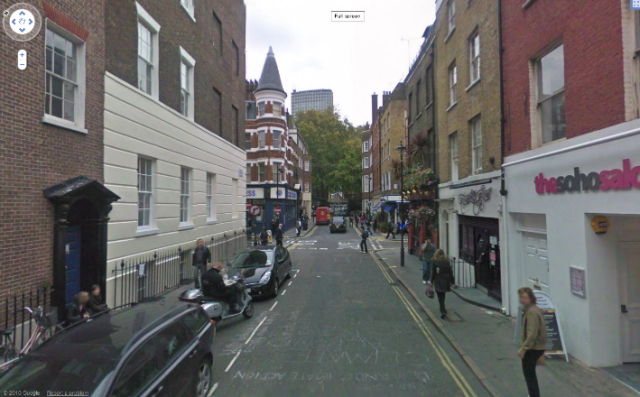 Ross Sutherland was born in Edinburgh in 1979. His one-man show, The Three Stigmata of Pacman, is on tour in 2011. Ross is also a member of the poetry collective Aisle16 with whom he runs Homework, an evening of literary miscellany in East London. He has two collections of poetry, Things To Do Before You Leave Town (2009) and Twelve Nudes (2010), both available from Penned in the Margins.

Poem looked up on Google Streetview

Two girls in sympathetic postures and winter coats
are swapping stories about Northern cities, or discussing granddads,
or impractical music stands, or psychoholography,
sat on the cold stone steps
of a chiropodists
or an editing suite.

Nearby, a cycle courier
or process server
stares at a sticker book of barcodes
or a holiday spread in the Express
or a terrible sandwich
with a look that is either entirely content
or sinister, or both.

Meanwhile, some fifty-five miles East and three years later,
I am sitting here, anchored off the coast of this story,
Trying to imagine how this gripping yarn will end.

Or even (let's be honest) how it intends to begin—
Software has automatically removed the identities
of the hundred people that led our characters up to this moment,
their faces blotted out with bits of British sky.

Across the street, a man with the haircut of pianist
walks purposefully towards Dean Street, and yet
try to follow him and you join another timeline.
The city resets at the crossroads, jumps back to 6am,
leaving nothing on the road
but vague chalked instructions
for yesterday's Climate Camp
already fading back into the tarmac.

These empty moments are often the most complicated,
where the thousandth analogy for London breaks down.
London is not a broken river, nor a waterlogged mirror,
nor an ageing, racist, colour-blind boxer. If we assigned a metaphor to it,

we’d just end up talking about something else.
Like a game of Charades where you pick words from a hat
and you unfold your paper to find the word CHARADES.

“Wet Paint,” says the sign on the railings.
Which is the closest we’re going to get to prophecy—
Everything here is still waiting to dry,
for some artist to return from his long lunch
and sketch that central character into the frame,
some camped-up London duke or pinstriped Beefeater.

Then again, perhaps the reason that we cannot see the hero
is because we are already possessing its body:
the Google Car itself, with its horrible insect eye
that forces the rest of London into a supporting role.

It’s in moments like this
that London has never felt more lonely.

By now, I think it is dark
on pretty much every street in England.
And so I slip a bookmark into London, turn off the city,
pour myself a glass of water
and return to the age-old literary device of Googling myself.

Hitting refresh
the same way our parents threw stones into lakes,
the same way cartoonists always start with the eyes
then return every couple of lines
and add another invisible circle.