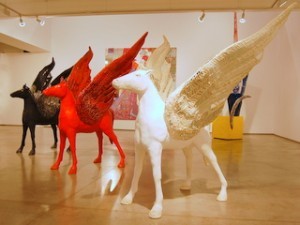 Andrew Logan, sculptor, jewellery-maker and performance artist is the quintessential eccentric English artist. Based in London, he has been exhibiting his works, a blend of camp pop-art and neo-romanticism, since the early 70s. These fantastical, bold creations can be found in far flung corners of the globe, our great British Art institutions, many random places and the purpose-built Andrew Logan Museum of Sculpture in mid-Wales. Forty years since he began, his abundant creativity shows no signs of waning – he has just completed a 45ft long installation in a hotel in India and is currently exhibiting at Flowers East on Kingsland Rd. He has also just opened a gallery and shop at his home, The Glasshouse, in London Bridge and a film, The British Guide to Showing Off, charting his life and his totally over-the-top brainchild Alternative Miss World, is out next year. Describing himself as somewhat of a monk due to a lifetime's dedication to the craft, we entered his psychedelic 'church' to discover more...

How did you go from studying architecture to becoming such a flamboyant artist?
I studied architecture in Oxford in the late 60s. I’d always wanted to help mankind and my thinking was that everyone needed a roof over their heads and that was a good place to start. However, I was always making things and was a jumble sale addict. When a friend and I took a half tab of LSD each, the extraordinary experiences I had changed my reality forever and gave me the insight and confidence to follow my own true path - I never needed to take it again. Soon after, I was lucky enough to be chosen as one of the artists for an ICA funded project ’10 sitting rooms’ my first show and the launch of my art career. My work became a celebration of colour and light,  working in glass especially. My first portrait was of Divine. I didn’t live off my work until 1980, although this was a time when a lot of my generation of artists were wiped out by AIDS and those of us left were getting over-looked as the new generation of Brit artists came around.

How has London inspired your work?
My work has gone way beyond London. I’m more influenced by the universe, but the people I know, friends and family, keep me here and inspire me.

In the 60s there were hardly any clubs or artists here in London but there was a fantastic scene and London really was swinging. In the early 70s everyone went over to New York. I remember arriving at a gallery there with a brochure with me smiling all over it, only to be told that smiling was ‘out’ that year. After having done an installation on Biba’s roof Garden in London,  I approached friend Andy Warhol in NYC with the idea of wrapping a rose around the empire state building. Warhol, forever the business man, promptly saw the money making opportunity in it saying I should create editions of it whereas I only saw the vision and just wanted to do it.

A lot of us started returning to London in ’75 and a fantastic scene soon flourished. There still weren’t many artists knocking about but The Rocky Horror Show was happening and I’d already staged two Alternative Miss Worlds. My studio at the time  was used by Malcolm McLaren and Vivienne Westwood to stage the notorious 'Valentine's Ball' in 1976 where the  Sex Pistols first came to light.

You are a true exponent of dressing up and showing off, is this what inspired you to create the Alternative Miss World?
We began Alternative Miss World (AMW) in '72 in a jigsaw factory in Islington. It developed as an extension of my love of throwing parties. It was all friends together, as contestants and judges, with the scoring lifted straight from Crufts Dog show.The second  AMW in ’73 got a bit more fashion-conscious with the likes of  Zandra, Bill Gibb , Ossie Clarke on board,  Angie Bowie was a judge, David couldn’t get in as it was packed out but it was through his connections with AMW and our  mutual friend, choreographer Lindsay Kemp, that helped him become the flamboyant showman we know and love.  Twelve AMWs later, it is still popular as ever with a whole new wave of people discovering it. Coming around every 4 years of or so, the last one in 2009, a sell-out, included Richard O'Brien, Molly Parkin and Zandra Rhodes as judges.

Young artists, such as Tallulah Rendell, often use your work in their performances and videos. What makes your work relevant today?
I think it’s more relevant today than it has ever been. The colour, joy and playfulness of the work attracts. It’s individual and bold and perhaps encourages that in others in an increasingly faceless world.  It's great to see kids and young people responding so positively to it. I embrace new technical advances and materials and have played with sound (many of my sound sculptures are in my museum in Wales). Brian Eno, long-time friend and collaborator created the music for my 4 flowers of the apocalypse piece in the current Flowers East gallery show.

Tell us a London Secret
My brother sculptor Peter Logan's exhibition at Fulham Palace Gardens has been there for about a year and has now been extended. Apart from the locals, no one seems to know the gardens are there. Also the fabulous John Soane museum.

Andrew Logan's Rejoice is running at Flowers East until December 31st. His new gallery and shop is situated at The Glasshouse, Melior Place, London, SE1 3SZ