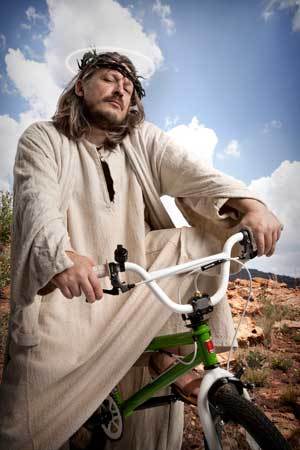 Be-sandalled, be-suited and be-bearded, Richard Herring brings the 'second coming' of his favourite solo show, Christ On A Bike, to the Leicester Square Theatre for a seasonal run.

A lot has happened in comedy since its debut in 2001. Rationalism and science are sexy. We like carols for godless people and expect James Mason to play God. But Christ On A Bike remains fresh, reclaiming the historical Jesus from the errors of the New Testament and filtering questions about Christian values and belief through Herring's trademark unabashed self-examination wrapped in childish 43 year old arrogance. Plus cock jokes.

The show is partly an attempt to justify his own existence, comparing his life achievements with those of the Messiah. Lacking the ability to cure lepers, Jesus is criticised for only curing 11. Searching for an epigram to rival "judge not, lest ye be judged", Herring's replacement of 'judge' with 'wank' is certainly memorable. Two vivid dream sequences about a bike race give a platform for his desire to literally compete with the Son of God and an opportunity for some post-modern asides, with Jesus warning him which jokes won't work.

It's also part academic disquisition. Literary Herring decimates the wording of the Ten Commandments, accusing God of making it up as he went along. Herring's concise "covet nothing" puts God's rambling sentences to shame. Historical Herring critiques the very first page of the New Testament, showcasing a remarkable feat of memory whilst kneecapping the gospels. Those 11 O-Levels have not been wasted.

We're not sure why the Leicester Square Theatre insist on an interval as this show should (and did in Edinburgh) run straight through. And we were unconvinced by his infant stories, read here as possible parables (his teenage poetry, in other settings, we can't get enough of). But a decade on, whilst Herring can't possibly live up to Jesus Christ Superstar - using the right words or the rude ones - there's warmth and humanity underpinning this thoughtful and funny show, not only in regard to his wonderful sounding parents but through the universal 'good bloke' values of a possible, human Jesus.

As usual, the programme (packed full of interesting background and the full text of that 'begat' sequence for your reading pleasure) is given away free but you are urged to give a donation to Scope on the way out. If you want to know why, there's a particularly moving passage about it in his book, How Not To Grow Up.

We interviewed Richard Herring back in 2006. If you haven't already, download the AIOTM podcasts and listen to them over Christmas.