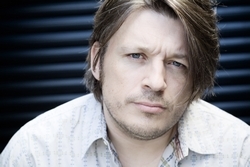 We'd like to start writing more about comedy here at Londonist. We have (arguably) the best comedy circuit in the world yet it has gone thusfar unwritten about by us at Londonist HQ. But fear not, we have changed our ways. We kick off with an interview with comedian, Richard Herring and a comedy recommendation for the week.

Richard Herring is probably best known for his television work with Stewart Lee, 'Fist of Fun' and 'This Morning with Richard Not Judy'. Since then he has done a number of one man shows and last year he returned to standup after a fourteen year absence. Richard recently co-wrote and presented the history based sketch show, 'This Was Then, This Is Now' for Radio 2 and is a panellist on the new Radio 4 gameshow 'Banter'. You can read his daily blog 'Warming Up', here. We caught up with hin after a preview of his Edinburgh show, 'Menage a Un' at the Battersea Arts Centre (very funny indeed),

Richard Herring - comedian, writer. I used to do things with Stewart Lee but now I do solo stuff and write for other people, I used to write for Al Murray and I was recently script editor for Little Britain, and the Grumpy old women stageshow. Starting my mid-life crisis about now.

The best places are the little places. Lovely little clubs. Now I’m successful I can pick and choose, I don’t do Jongleurs or the Comedy Store which are alright for what they are but if you are into comedy they aren’t the place to go. I love the more experimental stuff - Robin Ince’s book club, Josie Long. Young comics trying stuff out. When you go to these places it’s usually 20 minutes of quite tedious stuff, 20 minutes of stuff that hasn’t quite worked and 20 mins of stuff that is great and exciting.

(Later on he mentions Headliners in Chiswick, Amused Moose, The Fortnight Club in Angel which he describes as "Lovely small gigs. Raw and exciting.")

Is London a good city for comedy?

Different cities at different times have different stuff going on but London always has interesting stuff going on. Bristol has a lot of interesting comedians at the moment but you have to come to London. That’s where everything is. At the moment it’s much more interesting than when I started in 1989, it was a very moribund and unimaginative stand up scene where everyone was doing the very obvious and formulaic standup gags but at the moment there seems to be a lot more experimentation, people enjoying language and ideas rather than just jokes. London is always going to be one of the best places in the world.

I did stand up for about two years when I first came to London and I hated it, now I’ve come back to it. I’ve come back and realized I was kind of wrong about it, it’s a medium in which you can do whatever you want to do, that’s very f**king rare. Even if you do a radio show there are seven other people looking over your shoulder, with TV there are 100 and executives telling you what to do. With standup you can really go and do whatever you want, I’m amazed at what I can get away with doing. I did a whole hour routine about buying yoghurt and you’d think that wouldn’t work but it nearly always did.

Is it hard to balance experimental work with things that you know will always make an audience laugh?

To really do the job you have to do stuff the audience aren’t going to like. Take someone like Peter Kay, he’s a crowd pleasing comedian, but I look at him and think if that were me, I don’t see how you’d get any pleasure out of doing the job. I’m a comedian and a writer, why am I doing this stuff about telling people things they already know to make them laugh? I want to tell them something they haven’t thought of that makes them they think “that’s true” or something that they don’t agree with, or something I don’t necessarily agree with. That’s obviously more difficult to come up with but I want to challenge people. It’s very easy to do an hour about Tony Blair and talk about how the war in Iraq is bad but actually it’s more challenging to talk about other things.

What are you most proud of in your career?

I’m not not proud of anything. There’s nothing I’ve done that’s been rubbish. 'Christ on a Bike' is the best Edinburgh show I’ve ever done. Now 6 years later, everyone is doing a religious show at Edinburgh this year. Sometimes I feel like I’m five years ahead. Critically, it’s gone ok, I’ve never been massively lauded, I’ve never won any awards but within the industry people respect me and appreciate my work.

Will you work with Stewart Lee again?

I doubt it. It’s our 20th anniversary of our first Edinburgh show next year which seems like the right time to do a reunion. If we were to do it we’d be taking a risk of people thinking “this isn’t as good as I remember”. I’ve thought of two really good routines we could do but I don’t think he’d do it, I think I was more into it than he was.

Does it annoy you that people identify you with the work you did with Stewart 7 years ago?

No, it’s kind of inevitable. If people come up to now and again you and say “I love that thing you did”, you have to feel good and say thanks!

What can we expect from your new show, ‘Menage a un’?

'Christ on a Bike' in Edinburgh - had a routine which I would have the audience shaking with laughter and with tears running down their face and still knew there was a funnier bit yet to come. A rare experience, but this is when comedy is at its best.

What I was doing was semi-illegal. They’d be better off doing what the music of Boney M needs, a pisstake. It’ll be terrible.

Without comedy you would be ….?

I’d probably be a teacher, all my family are teachers. I’d certainly be unhappy. Whatever I say on stage, this is such a f**king brilliant job, coming back to stand up has been brilliant for me. It’s the best job in the world. It’s annoying and worrying and there’s no security - what will I do next year and what if everyone decides I’m not funny anymore? I think that ultimately if I can keep doing the job until I die, I’ll be really really happy.

Tonight, Outside the Box, The Fighting Cocks Pub, Kingston

Comedy this Week - Sunday 23rd, The Sunday Night Adventure Club! 8pm at Cafe ABC in Crystal Palace. Josie Long (recommended earlier by Richard Herring) is taking her club over a little more than usual to do a preview of her Edinburgh show there. After her there will be accordion from Martin White and then a set from Manchester’s Daniel Nightingale. You will need to book.