Comedy Review: As It Occurs to Me @ Leicester Square Theatre

By Londonist Last edited 155 months ago
Londonist Comedy Review: As It Occurs to Me @ Leicester Square Theatre 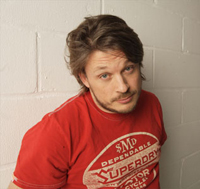 What do comedians do when they can't get their ideas on the television or radio? Is it possible for a comedian to create and then successfully broadcast their work on their own, without the need for the involvement of mainstream media?

For the past 7 weeks, comedian Richard Herring has been attempting just that; writing, performing, recording and releasing a podcast of the live stand-up and sketch show, As It Occurs to Me. Free from the constraints of broadcasting compliance, but equally free from editing and written in just a few days, AIOTM has previously featured naughty dogs and how to blame them for your crimes, the pitfalls of buying yoghurt whilst slightly drunk and the plight of a “failing comedian” desperate to be back on the telly.

The premise is simple: Richard talks about what has occurred to him this week, and brings his experiences to life with sketches and celebrity endorsements. Whilst Rich runs the show he is backed up by contributions from the wonderful Emma Kennedy, who this week gave us the backstage scoop on the Calvin Harris X-Factor stage invasion, and Dan Tetsell, who by his own admission isn't very good at impressions, but does a great Andrew Collins. Music is provided by Christian Reilly, often with lyrics taken from disgruntled iTunes reviewers of the podcast. Each show also includes the opportunity for the audience to tell the world what has occurred to them, with both banal and surprisingly amusing results.

The podcast is available free from iTunes or through the British Comedy Guide so you don't have to make the journey to the Leicester Square Theatre to find out what the show is all about. However the atmosphere at the recording definitely adds to the experience, as the mistakes, the bits that don't really work and the goodwill of the audience make for a charming and engaging experience.

There are only three more shows to go in the run of ten. Tickets are only £10 and can be purchased online, or on the night from the box office.