Central Core Of The Shard Tops Out 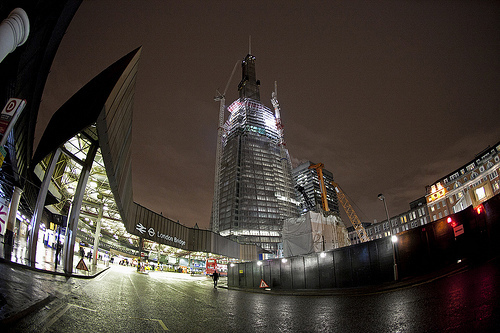 A ceremony was held earlier today to mark the topping out of the central concrete core of The Shard. The building now reaches 72 storeys into the London sky, and is around 244m tall, with another 66m yet to go.

As our picture gallery from a few weeks ago showed, the building already has a huge profile on the London skyline, and has hogged more headlines than any under-construction project since the Gherkin. It has also generated strong opinions, though even the critics concede that it's an impressive structure: speaking on Radio 4, professional miserablist Simon Jenkins called it "visually exciting", although he went on to argue that it was in the wrong place (Canary Wharf would be his preference).

Estates Gazette has a collection of photographs from today's visit to the tower's 24th floor, while the BBC's Evan Davis has also been reporting from the site. There are also reports that Christmas lights attached to the building will be switched on this evening, so keep your eyes peeled.