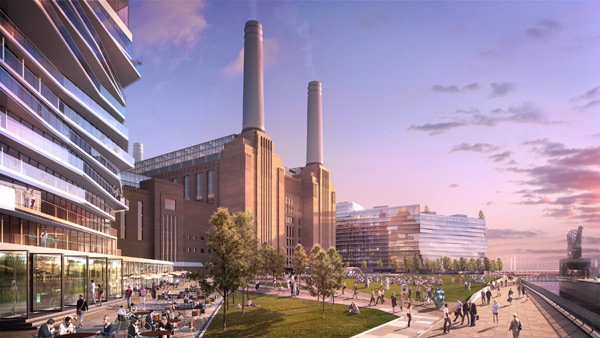 Boris Johnson has approved the latest redevelopment plans for Battersea Power Station, a month after the proposal was waved through by Wandsworth Council.

The project will convert what is left of the building, which opened in 1933, into the centre of a new shopping, office, residential, and retail complex, served by a two-stop extension to the Northern line. It would involve re-building the distinctive chimneys, which are now thought to be beyond repair. Under the current timeline, the first part would be completed in 2016, with the the final phase (including the new stations) finished for 2024.

The Mayor's imprimature isn't the final bureaucratic hurdle — the plan will next fetch up on the desk of Eric Pickles, Secretary for Community and Local Government — but until the builders have actually arrived, Londoners will be rightly sceptical about the prospect of anything happening to the dilapidated building.

The station was decommissioned in 1983 and, as Hugh Pearman noted yesterday, it is now 24 years and seven months since planning permission was given to the first project to redevelop it. That plan, which sought to turn the site into a theme park based on Britain's industrial heritage, stalled in 1989, though not before much of the building's roof was removed. After several changes of hands, the station now rests on the books of Real Estate Opportunities, the group behind the current redevelopment.

And how is their financial position? Not good: earlier this week the Guardian reported that much of the money REO used to purchase Battersea came from the Bank of Ireland. The huge debt accrued by the firm has been bought up by that country's new 'bad bank', the National Asset Management Agency. Not exactly the most promising financial position with which to pull off a £5.5 billion redevelopment.