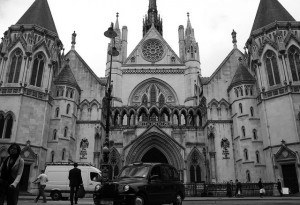 The appeal of Rangzieb Ahmed against his 2008 conviction on terrorism charges opened on Tuesday at the High Court on the Strand with barrister Joel Bennathan arguing that the UK government was complicit in his unlawful arrest, interrogation and torture by the Pakistani intelligence services, ISI.

Rangzieb Ahmed, who had three fingernails pulled out with pliers while in custody in Pakistan and was beaten with cables and tyres, shackled hand and foot and deprived of sleep, is challenging his conviction for membership of Al Qaida and being involved in directing a terrorist organisation. The jury in the original trial in Manchester never heard the torture allegations, as they were heard in camera during pre-trial arguments; however, they were substantially considered by the trial judge to be 'credible'.

Much of the evidence in this case has been shrouded in secrecy, as government concerns about 'national security' have resulted in press and public being regularly cleared from the court, and yesterday was no exception. The public gallery was emptied at midday and the hearing is not expected to become public again until this afternoon.

However, in 2009, using parliamentary privilege, Conservative MP David Davis addressed the Commons in detail about Rangzieb Ahmed's case, arguing that by allowing him to travel to Pakistan in 2006, when he was already under surveillance by Manchester police and MI5, and 'suggesting' to the ISI he be arrested, UK officials were in effect 'suggesting torture'. Davis also told MPs that many of the questions put to Ahmed were drawn up by MI5 and handed over to the Pakistanis. Ahmed's barrister is arguing that the original trial constitutes an abuse of process and that therefore the conviction should not stand.

Neither Rangzieb Ahmed nor his co-accused Habib Ahmed were present in the London court but followed proceedings via videolink from Full Sutton prison.

Image: Court of Appeal at the Royal Courts of Justice by Tom Spender