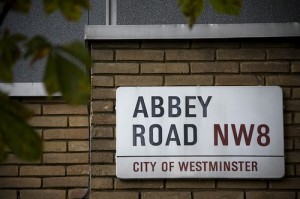 The zebra crossing in St John's Wood, immortalised for posterity when four tousle-haired Liverpudlians walked across it one balmy day in 1969, has been granted Grade II listed status, the first time a piece of roadway has been so honoured.

John Penrose, Minister for Tourism and Heritage, made the announcement earlier today, saying that the crossing "has as strong a claim as any to be seen as part of our heritage." Be that as it may, but Abbey Road clearly doesn't ruffle everybody's moptop: last year a local councillor argued that the crossing should be moved, citing the number of accidents and incidents caused by fans faithfully recreating the album cover. The nearby recording studio, meanwhile, was nearly sold by a hard-up EMI, who quickly rethought the idea after a public outcry; it was also awarded listed status earlier this year.

Coincidentally, the flared white suit sported by John Lennon on the Abbey Road cover is to be auctioned on New Year's Day, in the unsuspecting locale of Norwalk, Connecticut. The current owner bought it for $120,000 in 2005 but, presumably tired of wearing it whilst striding purposelessly back and forth across a zebra crossing, has decided to part with his precious garments.