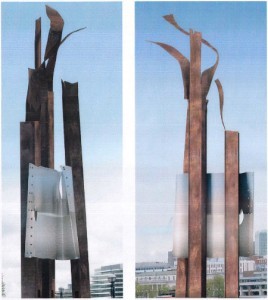 Update: The memorial was approved on Monday night by Southwark Council.

Original piece: A group called the 9/11 London Project Foundation is hoping to build a memorial to honour the victims of the 2001 terrorist attacks, using steel girders taken from Ground Zero.

The twisted wreckage, designed into an eight metre-tall statue set into a reflective pool by artist Miya Ando, would be transported from Manhattan to Potters Field Park, next to Tower Bridge and City Hall, and form a permanent memorial to the near-3,000 victims. The Port Authority of New York is sending other girders around the world, and hopes to get them in place ahead of the 10th anniversary of the attacks in September. Southwark council is to consider the planning application today.

Some feel that the location and style of the installation (described in one comment as "overpowering and violent") aren't appropriate. London already has a memorial garden for the victims of the attacks, in Grosvenor Square, opposite the US Embassy. Local residents around Shad Thames have registered their complaints on the SE1 forums, while the Potters Field Park Management Trust is also opposed.

However, it is thought that Southwark will approve the plan today.